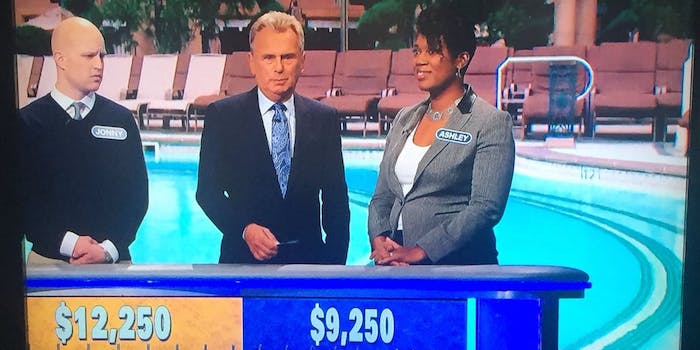 His face says it all.

Word to the wise, everyone: if you plan to compete on Wheel of Fortune, make sure you’re prepared to not only spell everything correctly but pronounce everything right, too.

A contestant on last night’s episode, named Jonny, missed out on a massive amount of money when he mispronounced a word he’d spelled out on the board. The board read, “Flamenco Dance Lessons,” but Jonny said “Flamingo Dance Lessons.”

Jonny was buzzed for having the incorrect answer, so fellow contestant Ashley easily won instead—costing him a whopping $7,100. Jonny’s face says it all as the show host tells him about the mistake he made.

Footage shared on Twitter showed that this was Jonny’s second major mistake of the evening. Earlier in the show, he couldn’t figure out the two missing letters on the board that seemed fairly easy to viewers.

Oh my god it gets worse. This guy on wheel of fortune better go into hiding after this epic embarrassment pic.twitter.com/2ZQNLr6y6L

People watching the show shared their mixed reactions of frustration, amazement, and shock.

Oh my god it gets worse. This guy on wheel of fortune better go into hiding after this epic embarrassment pic.twitter.com/2ZQNLr6y6L

Is anyone watching wheel of fortune???? 😂😂😂😂 because I'm dying laughing. Dude solved the entire puzzle and pronounced it wrong so got the whole thing wrong

I'm crazy into Wheel of Fortune right now. The guy just had the entire puzzle on the screen but pronounced "Flamenco" as "Flamingo" & Pat said he didn't win. He's mad & I've never felt more like an old lady for being so into this debacle. pic.twitter.com/93tF0RstpF

THIS MAN ON WHEEL OF FORTUNE SOLVED THE PUZZLE BUT SAID FLAMINGO INSTEAD OF FLAMENCO AND THE WOMAN NEXT TO HIM WON THE TRIP AND HE’S HELLA PISSED. THIS IS THE DRAMA I LIVE FOR pic.twitter.com/iZO2BmV8fO

That poor guy on wheel of fortune… #flamingo pic.twitter.com/79P8Azl5jw

Apparently, the last puzzle answer of the episode last night summed up everyone’s feelings perfectly. It was, “What Just Happened.”