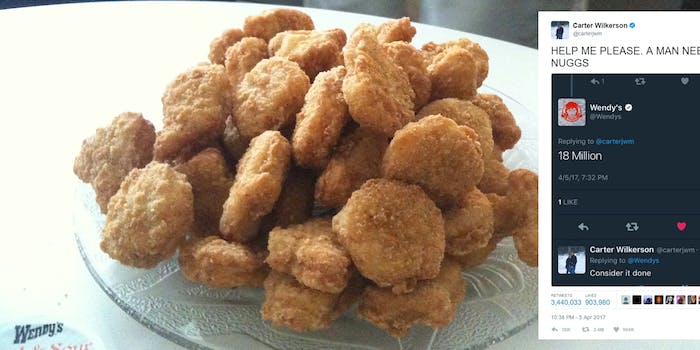 One man tried to change the world—and he succeeded.

Carter Wilkerson’s attempt to get 18 million retweets in exchange for unlimited chicken nuggets from Wendy’s for a year broke the record for most retweets ever. And despite falling very short of the high bar it set for him, Wendy’s is giving the kid free nuggets for a year anyway.

We did it guys! Thanks to you're help and support we were able to raise $100k for @DTFA and beat @TheEllenShow record! Now let's get 18mil!

.@carterjwm is now the most retweeted tweet of all-time. That’s good for the nuggets, and $100k to @DTFA. Consider it done. #nuggsforcarter pic.twitter.com/k6uhsJiP4E

He gets them nuggs

He gets them nugs.

As of post time, Carter’s tweet, at 3,437,435, has 7K more retweets than Ellen Degeneres’ Oscar selfie, the previous record-holder, which went viral in 2014. Ellen bested Barack Obama’s November 2012 tweet of “Four more years,” which back then had three-quarters of a million.

Carter’s campaign began in earnest (and possibly in jest) back in early April, when, on a lark, he asked the fast-food chain how many retweets he would need to get to get a year’s worth of free nuggets.

The company responded with an impossibly high bar, but that didn’t dissuade Wilkerson.

Wilkerson quickly racked up one million tweets in two days, but then plateaued. It took him an appearance on Ellen to get over the proverbial hump.

Ellen filmed a short PSA with Bradley Cooper to help boost her numbers, but the publicity Wilkerson got from the appearance was enough to push him over the top.

Alongside the nuggets, Wendy’s is donating $100,000 to the Dave Thomas Foundation for Adoption in Wilkerson’s name.

Ellen also gave him a year’s supply of underwear and a new TV, in the hopes that he would ask people to retweet her tweet too, keeping her at No. 1 while Wilkerson pushed onward to 18 million.

It is unclear whether Degeneres will follow through on her promise to take back the TV and underwear now that he’s surpassed her.

Wilkerson told the New York Times that his record is gonna look “pretty cool” on a college application.