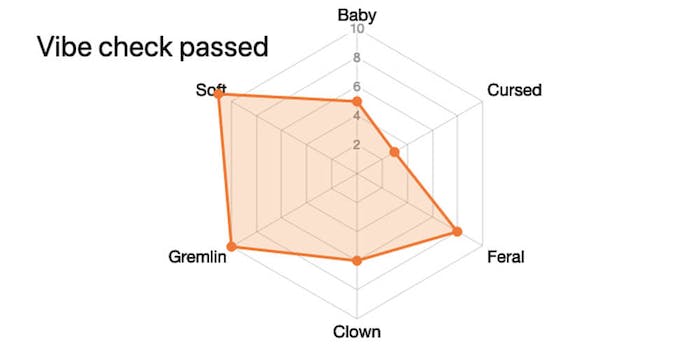 Are you a baby clown or a feral gremlin?

In early October, the phrase “vibe check” began circulating on Twitter, which–according to its earliest known definition–means generally to “obtain a subjective assessment of the mental and emotional state of another person, place or thing.” Yet, given the inherent vagueness of the meaning, there was still some confusion as to what doing a vibe check actually involved. So it may or may not come as a relief that there is now an equally viral “vibe check test” that makes it easy for anyone to play along.

The Japanese test-generating website ShindanMaker, which lets you “diagnose” yourself for a myriad of conditions from “how much of a thot” or “how straight you actually are” to your high school stereotype, now has a test that allows you to do a vibe check. According to Know Your Meme, the Vibe Check test was created on Oct. 26 by ShindanMaker user kitsu_foxpurr. Within just three days, the test shot up to the site’s top diagnoses with over 372,000 users having taken it.

All you have to do is enter your name—or anyone else’s name, for that matter—and in return you receive a chart that informs you where your vibe lands on a spectrum of “baby,” “clown,” gremlin,” “feral,” “soft,” and “cursed.” (It also lets you know whether you passed or failed the test.)

As you can see below, this very writer is apparently a soft and feral gremlin, which most people who know her probably wouldn’t argue with.

Given that the website has a feature that allows you to populate your results into a tweet, it didn’t take long before it went viral on Twitter. The first known instance of the test being shared was by Twitter user @sylvainsfw the same day it was published.

As you can see from some of the other tweets below, other users are having various degrees of success with the vibe check test:

Our sincerest condolences to anyone whose vibe check test yielded the result of a soft baby clown. Unless that’s the vibe you’re going for, of course—in which case, go on with ya soft baby clown self.