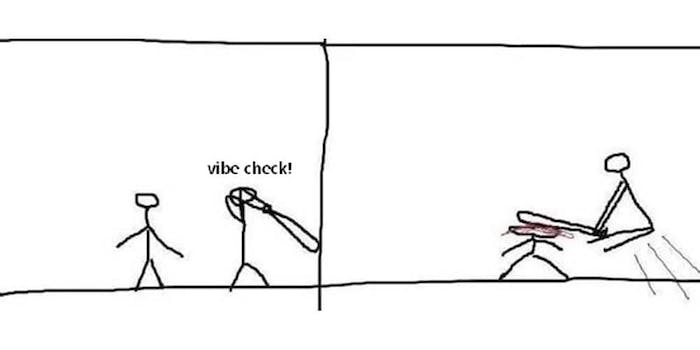 What does ‘vibe check’ mean?

Kind of nothing but also everything?

Anyone who spends a fair amount of time online has probably noticed the phrase “vibe check” recently being thrown around willy-nilly. But what does it mean? Are you in need of one? As with many internet anomalies, there is no short answer, and the long answer is … Well, let’s just say complicated.

Where did ‘vibe check’ originate?

The earliest known use of the phrase comes to us from a relatively trippy Urban Dictionary post from April 18, 2011, which defines it as: “A process by which a group or individual obtains a subjective assessment of the mental and emotional state of another person, place or thing.”

“Not anchored in or limited to science, psychology or sociology. Grounded in a belief in pachouli, sage, or karma and sometimes veggie burgers.”

At any rate, the phrase lay dormant for the better part of a decade, until earlier this year when it first saw an uptick on Twitter. The source of its popularity is disputed, although technically Twitter user @umru_, a music producer, was first credited with using it on March 24, 2019.

He later told Mashable that he first said “vibe check” out loud while trying to nail down the vibe at an event he was planning, and that it happened to be the easiest way to convey that to the graphic designer.

About a week later, however, the phrase was either discovered and/or appropriated by user @cake_hoarder, who has since begun referring to himself as “the vibe check guy.” It started out innocently enough, with a tweet that simply stated “vibe check.”

Since then, @cake_hoarder has been tweeting daily “vibe check” posts, typically pairing the phrase with an absurd or outlandish image, as you can see from the examples below. (Many, but not all of the tweets involve cats, dogs, frogs, or other animals.)

gm can I get a vibe check? pic.twitter.com/KzzOC3dmER

gm can I get a vibe check? pic.twitter.com/ZQKdehihyy

gm can I get a vibe check? pic.twitter.com/p64pAxe6NL

gm can I get a vibe check? pic.twitter.com/Br25zGZAO1

gm can I get a vibe check? pic.twitter.com/UirCOjVZnq

gm can I get a vibe check? pic.twitter.com/SPrwHfz4Sl

The dueling vibe check curators also led to a disagreement over the origin of the phrase on Twitter:

this is bullshit. not only did vibe check get stolen from us it got stolen ON MY BIRTHDAY?? https://t.co/gEoz8Yjytn

As the phrase began to go viral, it became sort of a catchall term for everything and anything. Some began using it as an earnest way to convey their present emotional state, while others made jokes and memes.

And then some people got kinda, uh, sexual with it?

Vibe check! *leans in for a kiss*

h-hey what if we did a vibe check… and we're both girls… and the vibe check was a kiss… haha jk…
…
unless?

By September of 2019, “vibe check” began to be used as a shitposting meme. Know Your Meme points to the following Tumblr post as the culprit, which depicts a stick figure cartoon hitting another stick figure over the head with a baseball bat. The post has since received over 35,000 notes.

In the weeks that have passed, the phrase is now synonymous with memes in which someone hits or attacks another person after offering them a “vibe check.” An updated Urban Dictionary top definition—as of October 3—now reflects the shitposting usage.

“A vibe check is a time where you’re about to deck someone with your fists or another blunt object while you’re on a vibe or when they say some stupid shit,” reads the second definition.

And as you can see, recent tweets certainly reflect that angle:

So what have we learned? As there is so wrong way to eat a Reese’s, there’s no wrong way to do a vibe check. Just like, maybe keep the violence to a minimum.