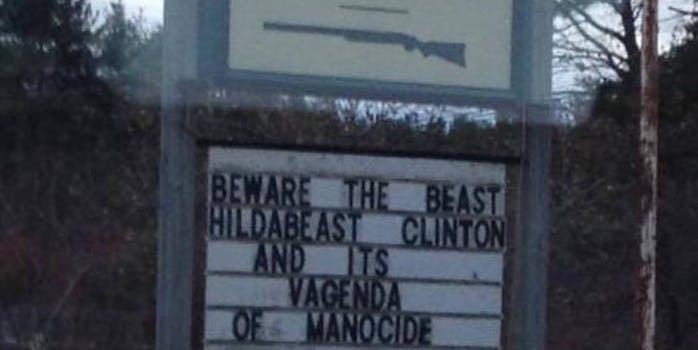 And you thought 'Hitlery' was bad.

The 2016 election is getting away from memes. Gone are the dozens of candidates vying for the presidency, including such gems as the Zodiac Killer, a competitive eater, and Jeb “please clap” Bush—and that’s just on the Republican side. All of them made great fodder for the internet, as did the DNC and RNC. But with both conventions wrapped up and nominees chosen, we’re in a bit of a meme drought.

The Raymond, Maine shop apparently specializes in signs so incredibly idiotic that they come full circle from earnest hatred to hilarity. Allow me to deconstruct this frankly incredible marquee.

Vagenda is a now defunct feminist magazine that ran from 2012 to 2015. Manocide is like homicide if you’ve never heard of homicide. And apparently Democratic nominee Hillary Clinton has become the Grimm’s Fairytales version of herself to haunt the same type of people who think wealth comes from sending threatening chain emails.

Gulf of Maine Gunsmithing has been pulling this shit for literal years. Its output of signs rallying against taxation and demarats spurred one Facebook user to even make a full photo album dedicated to them.

The shop’s Facebook page is littered with bad reviews decrying the signs and owner Bill Darling’s politics. On Twitter, it’s a different story.

Mary, Mary, quite contrary, how does your garden grow? With a vagenda of manocide, so watch out, buddy.

just ticking off items on my vagenda of manocide to-do list pic.twitter.com/ppsou7mRlN

Not only have we finally found the best marquee of the election, but it looks like the to-do list just got a rebranding.

What’s on your vagenda? Me? I gotta do laundry, make dinner, and probably commit some manocide. As you do.

HOLY SHIT you guys, go to https://t.co/u4Qy8aSXkv and consequently BOW DOWN before Hilary's web people.