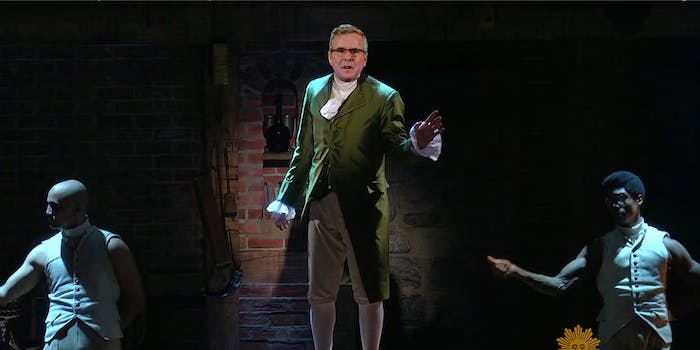 The Internet crowdsourced a full-fledged ‘Hamilton’ parody about Jeb Bush

'I am not throwin' away mah point!'

Broadway and the Republican establishment are colliding to tell the story of the 2016 election—and of the man who would have it all, lose it all.

At first glance, Florida Gov. Jeb Bush and Treasury Secretary Alexander Hamilton don’t have much in common. The former Cabinet official, as Hamilton star and composer Lin-Manuel Miranda puts it, is a “bastard, orphan, son of a whore, and a Scotsman,” while Bush is part of a political dynasty.

Although neither will be president and both of their upbringings influenced their political journeys, one had to rise up before his downfall, while the other one started at the top. But thanks to the power of the Internet, they’re now inextricably linked in a crowdsourced Hamilton parody.

The musical, Jeb!: An American Disappointment, is the collective work of 19 primary authors and 70 other contributors, and within its Google Doc pages is something of a brilliant political satire.

While it’s not the first time the 2016 election and Hamilton have collided, it’s certainly the biggest collaboration to date.

According to its authors, Jeb! grew out of something born in a Facebook meme group back in March. The authors wrote approximately three-quarters of the musical in about the span of the week; after that, it was a matter of tweaking and revising, with the authors dividing up different aspects of the musical among themselves.

“None of us have met in real life, but through the power of the Internet, we were able to not only create this project, but become friends,” the collaborators told the Daily Dot in an email.

How did they write like they were running out of time? Easy: Hamilton‘s modern-day Republican counterparts fell into place a lot more easily than anyone expected.

“[T]he fact that we were able to so easily find analogies and similarities between Lin-Manuel Miranda’s story of the American Revolution and the ‘Devolution’ of today’s Republican Primary was rather startling, and shows that maybe the politics of America’s birth and today aren’t so different,” they explained. “The viciousness, entertaining personalities and general craziness of this election season collectively make for great theater.”

Naturally Bush is the Hamilton of his story, and Donald Trump is his Aaron Burr—the man who killed his political career (Sad!). Bush has his own “GW” mentor in brother President George W. Bush; Ted Cruz is Thomas Jefferson, Marco Rubio is Hamilton’s son Philip; and Chris Christie is the spy on the inside, Hercules Mulligan.

References to real quotes and news stories feature the proper citations, just like a historical biography or a Wikipedia page.

The role of King George III is split between Bill Clinton, Barack Obama, and Hillary Clinton—“you know,” the collaborators say, “the evil enemies of our Republican heroes”—and the Schuyler sisters aren’t people, per se, but just as important to politics: Interests, Voters, and Money.

Even Bernie Sanders gets a shoutout as loyalist Samuel Seabury.

Jeb! uses Hamilton as its backbone while weaving in songs about things like Super PACs and immigration.

Here’s an excerpt from the new version of “My Shot,” told from Bush’s perspective:

What are the odds that God would put us all in one spot?
Poppin a squat on conventional politics like it or not
A buncha mediocre ammunition-friendly scared evangelists
Give me a donation—show me where the PAC money is!
Oh am I talking too soft?
I never get over excited, or ever shoot off,
I’ve never had a group of friends before.
I promise I won’t tick y’all off.

Yo, I’m Springsteen’s biggest fanboy
Spending 80 grand at the Giants’ concession stands, boy
I’m joinin’ up with Donald cause I’m sure it’s my chance
To advance, maybe he’ll let me be his vice presidance

And this version of “Wait For It” zeroes in on Trump’s many insults about Bush’s legacy:

Bush won’t be playing a major role in the rest of the 2016 election, but of all the losers vanquished by Trump, he may have one of the more compelling stories.

“We want people to see a new, softer, more sensitive side to Jeb!” the writers explained. “While we may not believe in his policies, he’s really quite lovable in our eyes and we wanted to express our sincere love for him and his achievements with our work. Also, hopefully next time he holds a press conference, there will be plenty of clapping. This election season has been crazy and intense, and so hopefully this lets people put it in perspective and just enjoy themselves. Plus, his campaign was quite a tragedy (as Trump would put it, a weak, sad, mess), and it’s always more interesting to tell a sad story than a super happy one.”

America eventually forgot Hamilton, but thanks to Miranda’s play, he’s finally having his moment in the spotlight more than 200 years after his death. Bush’s new moment, meanwhile, arrived just two months after he dropped out of the presidential race—and if we’re being honest, two months feels like 200 years in this never-ending election cycle.