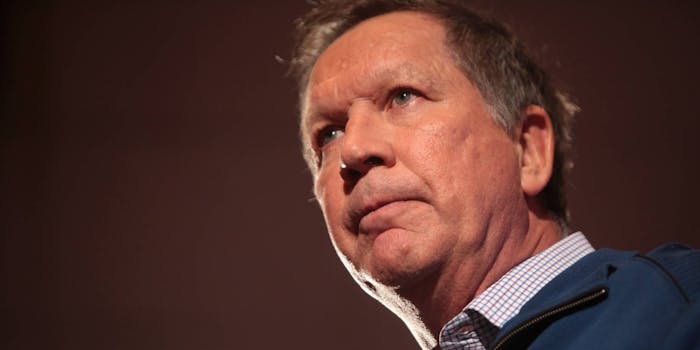 Reaching the people through binge-eating.

Republicans are kind of freaking out about New York. The Empire State’s primary is not only a yuge deal, it’s a proportional affair. That means candidates actually have to garner the favor of a wide majority of voters. How awful!

Some presidential hopefuls and their ilk have taken to memes. Others (ahem, Ted Cruz) don’t have a chance in Hell’s Kitchen of acclimating themselves to dreaded New York values. Not John Kasich, though. John Kasich is now a man of the people.

I think Kasich is enjoying the Bronx pic.twitter.com/WXOBhO84my

You see, New York taught him a thing or two about the basics—like eating. Gone are the stupid utensils used to carve up a pizza. With just two weeks to go until the New York Primary, Kasich is going HAM on every Italian food imaginable, ingesting calories as if every heart attack comes with a free delegate. You want the man to chow down? Oh, he’ll chow the fuck down.

Look at Kasich make sweet mouth-love to that hunk of sliced salami. And don’t even get him started on heavier fare, like spaghetti. Watch out, hockey. Food has just become this Ohioan’s favorite contact sport.

Damn: after downing two plates of spaghetti and half a sandwich, Kasich orders pasta fagioli pic.twitter.com/8oXAxH3q3G

“If I lived here, I would be here every day,” Kasich spits out between sharp inhales of scant oxygen that keeps him upright as he downs another plate of pasta. The only thing moderate about John Kasich is his politics. Homeboy has no chill when it comes to the feast of food he devoured at Mike’s Deli on Arthur Avenue in the Bronx. The legendary shop even created their own sandwich for him.

UPDATE: Kasich staff does not order off the regular deli menu, creates "Kasich special" instead pic.twitter.com/M3rCeycBr1

Something tells me a Tour de Kasich, recreating the candidate’s massive Thursday afternoon meal, may be the next pseudo-presidential item to grace the menu.

HOLD UP: the deli john kasich is at right now has THIS SANDWICH pic.twitter.com/kjfJTHlN9I

After all, Hillary Clinton has her own sandwich at Mike’s. Why can’t good old amateur competitive eater John Kasich get a piece of the pie too? Oh, wait. Never mind. He just devoured it.