Is America ready for a Zodiac Killer president?

The perplexing, decades-long case of the Zodiac Killer—a notorious serial murderer active in Northern California in the 1960s and 1970s—remains an open one to this day. At the height of his lethal spree, he even taunted police with perplexing letters and cryptograms, but he was never identified.

Nevertheless, sleuths both professional and amateur have their theories as to who Zodiac was—or is. Any number of names have been proposed. And one suspect in particular has come to the fore of late. I’m talking, of course, about Republican presidential candidate Sen. Ted Cruz (R-Texas).

This particular hypothesis seems to have originated back in 2013, long before Cruz had announced his presidential run, when he made an unexpected speech at the Conservative Political Action Conference.

#CPAC Alert: Ted Cruz is speaking!! His speech is titled: 'This Is The Zodiac Speaking'

Since then, the evidence against Cruz has mounted with alarming speed, and Twitter detectives are offering new clues with the hashtag #ZodiacTed.

ted cruz search history:
"can the zodiac be president"
"how to get murder stains out of dockers"
"zodiac killer discount where" #ZodiacTed

When Ted Cruz is at home he refers to himself as The Zodiac. "Zodiac has to go to the bathroom. Zodiac is going to the fridge for a beer."

How would Ted Cruz deal with immigrants, I think he would do what he did when he was zodiac killer

Ted Cruz busts into the studio and rushes onstage, yanking Lincoln Chafee's mic out of the podium. "I'm seriously the Zodiac Killer."

They cracked the cryptogram. "I, Ted Cruz, the infamous Zodiac Killer, will run for President in 2016" #ZodiacTed pic.twitter.com/bQ3tDOvdzx

movie fact: bill murray whispers "ted cruz is the zodiac killer" to scarlett johansson at the end of lost in translation

While Cruz himself has failed to repudiate these disturbing claims, he does appear to have a few defenders, including faceless Facebook users Pamela Wagner and Marcia Rose Beachler Woodham. 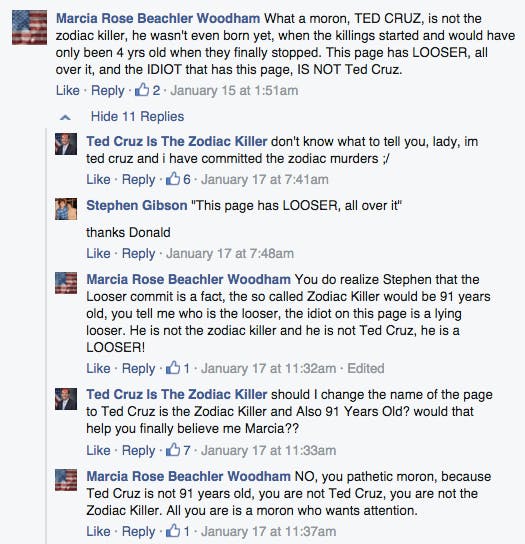 Whether or not there’s any truth to this line of reasoning, it speaks to a broader issue: Is America ready for a Zodiac Killer president? Perhaps once Donald Trump reveals that he’s literally the Boston Strangler.  Photo via Wikimedia Commons/PD-US-NO-NOTICE