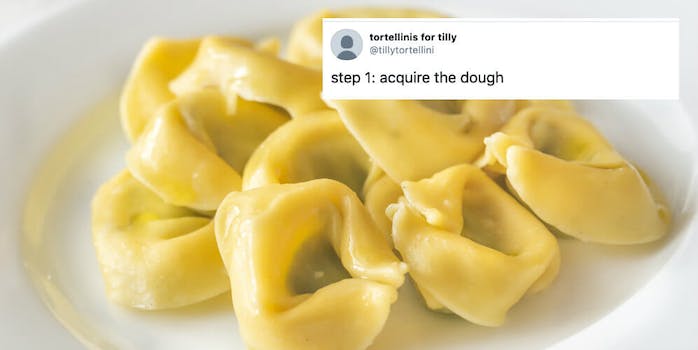 The path to Twitter's heart is through its stomach.

Throughout history, people have gone to great lengths for love, but has anyone ever made a tortellini-centric Twitter account?

On Tuesday, Twitter user @nextleveltilly revealed that this is exactly what happened to her. A Tinder match was explaining to her how to make tortellini from scratch but was confounded by not being able to send pictures. Next thing she knew, “Tortellinis For Tilly” (@tillytortellini) was born.

The charming six-step thread begins with “Acquire the dough.” From there, one must “establish a rapport with the dough,” “betray the dough,” build a “tortellini army,” and then “enjoy the fruits of your labor.”

Finally, the last step is “win her heart.”

This thoughtful tortellini thread thrust into the discourse, ticking up in traffic, taking off, and trending totally viral. The original tweet from the titular Tilly took in a total of 457.7 thousand likes as of Thursday.

Judging by the comments on the post, most people were enchanted by the thread. Even Twitter weighed in to offer their support.

Rooting for you and pasta man

And of course, @artdecider made the right decision regarding the tweet.

As is always the case with viral tweets, some haters cast doubt on this pure, true moment of pasta-based flirtation. Tilly, for her part, was having none of it. (Her tweets are now private.)

But, for the most part, this was a rare objectively nice moment to be online.

Marry this man & only serve tortellini at the wedding

Will these two work out? It’s hard to say. After all, there are no rules in love and pasta. But, for a brief, shining moment, the world stopped turning, and we were all focused on romance. And carbohydrates.