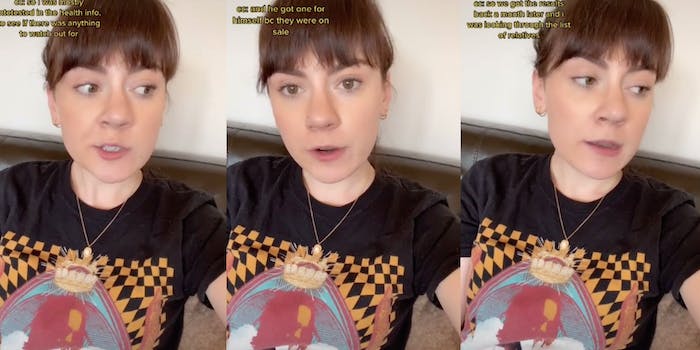 ‘I would die on the spot’: TikToker finds out she and her boyfriend are cousins after taking DNA test he bought her

'This is literally my nightmare.'

A TikToker discovered a breakup-worthy detail about her boyfriend after taking a DNA test he gifted her.

The 22-year-old TikTok user, @mattilathehun on the platform, explained in a video how she received a DNA test from her boyfriend as a birthday present. She “really never knew (her) biological father,” and her mother was adopted, making her mom the only biological relative she knows. “So I was mostly interested in the health information you know to see if there was anything I needed to look out for. And he got one for himself because they were on sale at the time,” she said in the clip.

It took a month for her to receive her results, and she was shocked when they finally came in.

“I scrolled down, and I turned to my boyfriend at the time, and I said, ‘Hey, this is pretty nifty, this person has the same name as you,’” @mattilathehun said. “And that’s how I found out I was dating my cousin.”

“I dare you to imagine a more ‘white person in Saskatchewan’ scenario than this,” she captioned the video, which was posted on Thursday and viewed nearly 600,000 times before the TikToker made her account private on Tuesday.

“I would die on the spot,” one viewer said, according to Yahoo Sports.

“I fear this situation,” another reportedly wrote.

“This is literally my nightmare right now,” a third said, according to the Daily Mail.

The couple reportedly broke up earlier in April.

In a followup video, @mattilathehun revealed that she and her ex could have been second—due to the amount of genetic material they shared—or third cousins. “My ex is a great guy and I still care for him deeply, but yeah,” she said.

This is not the first time a TikToker has gone viral for discovering unsettling information through a DNA test. A 20-something-year-old TikToker in February found out she was almost three years older than the age she thought she was after taking one. And another TikToker found out her biological father is actually a “billionaire” family friend in January after taking a DNA test that her father got her as a Christmas gift.