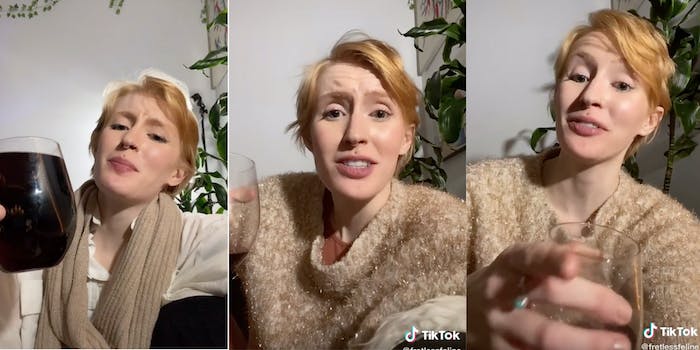 Her dad encouraged her to take a DNA test. It didn't go as planned.

A TikToker went to the platform to confess that after taking a DNA test at her father’s urging, she learned that her father is not her real father—and contends that her “exact paternal match” is a billionaire CEO of a company who she tracked down.

Cat McDonald, who is @fretlessfeline on TikTok, has drawn 5.4 million views to “Part 1” of her incredible tale on the platform since posting it this past Saturday.

In the video, she’s answering the question, “Did anyone else take an Ancestry DNA test and accidentally uncover a family secret?”

While drinking wine, McDonald notes, in response to the question, “OK, I’ve got a story for you.”

She starts by claiming, “My dad came up with the brilliant idea of giving the entire family ancestry DNA kits last year for Christmas. I, too, have identified as Irish because my last name is McDonald, and my hair is bright fucking red.”

But she found, upon taking the test, “Turns out, I’m 75% Norwegian, and the rest is like German and British, and there’s zero Irish.”

Her Irish dad found this impossible, but as she relayed, she had an “exact paternal match—it just wasn’t him!”

After realizing she couldn’t leave everyone hanging, she poured a comically large glass of wine and proceeded with “Part 2” of her tale, posted Monday and approaching the 1 million view mark three days later.

“I confronted my mom and two of my aunts immediately,” she said. “Everyone, including my mother, was fucking shook. But even my dad recognized the name. … Apparently, he was an old family friend.”

She went on to say, “So, I Googled this dude’s name. And he’s a billionaire. He’s the CEO for a major company, and his three daughters work for him. And naturally, like the unstable millennial that I am, I drive halfway across the country to his corporate office.”

She added, “I tried to give him a letter but when he heard my name he refused to meet with me. Basically, all it said was thank you, because I’m really happy to be alive.”

She’s also pledging a “Part 3” to the story should anything else come to light. As she said with just a hint of understatement, “You know as much as I do at this point, but I really want more answers.”