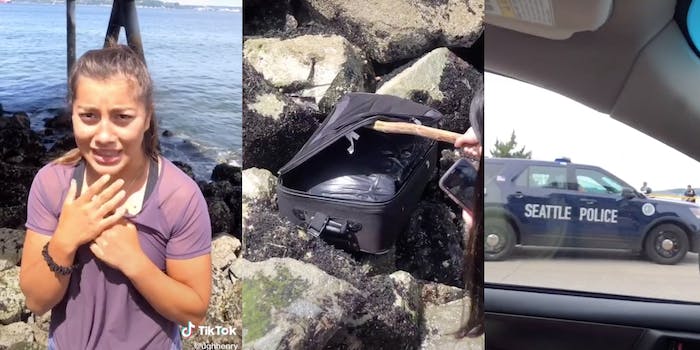 A group of teens who set out for adventure using the Randonautica app instead had the shock of a lifetime when they appear to have encountered a suitcase full of human remains.

Teens in Washington were documenting their trip to the beach after being sent there by Randonautica, an app that sends users to randomized nearby coordinates to explore new areas of their city, when they noticed a black suitcase washed up on the rocks down by the water.

Video posted to TikTok shows two girls in the group opening the suitcase, with captions noting that “the smell was overwhelming.” Inside, they discovered a black plastic bag covering whatever was causing the stench.

Concerned about the smell, the teens called the police, informing them there may be a body down at Alki Beach in Seattle. Another video notes that officers didn’t show up for three hours and features footage of the tide rising around the suitcase.

“Eventually the tide came up and exposed the contents in the bag…” reads text across the screen. “(But I decided to leave those parts out.)”

Later, reports confirmed that several bags of human remains were found at the beach. Though the press release didn’t specifically tie the discovery to the teens, the timing and location would appear to fit.

The videos have caused a stir on social media, with the one shared by @ughhenry racking up nearly 3 million views so far.

“I absolutely didn’t see ‘tiktok of teens finding a body in a suitcase possibly indicating a new Seattle area serial killer’ as the next 2020 development,” wrote @cautiousamber.

There was also a fair amount of concern over the Randonautica app allegedly leading these teens to this particular spot.

Wired previously reported on some “weird coincidences” that have been happening for Randonautica users visiting the supposedly randomized locations during lockdown, and a few folks in the comments added their own observations.

TikTok user @ughhenry, one of the teens in the video, admitted that the incident as left him somewhat traumatized.

“Btw my laughter is the way I was trying to get through the situation,” he wrote in the comments. “The moment i got back home, I broke down. I still can’t sleep.”

The police are still investigating and haven’t publicized any additional information about the discovery of the remains or potential crime.