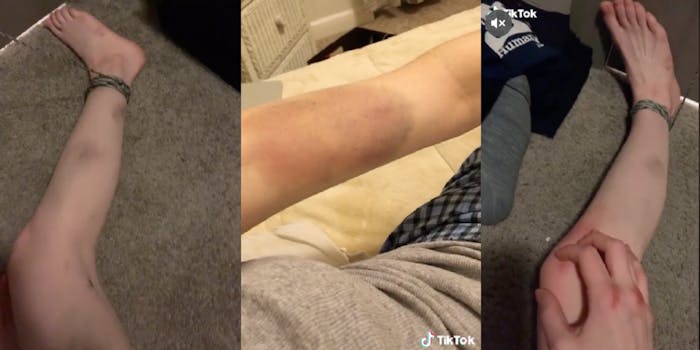 Police get involved after TikToker posted videos of her alleged kidnapping

She shared a series of videos showing bruises on her body and ropes tied around her ankles.

A series of videos went viral on TikTok this week after the person who posted them claimed that she had been kidnapped and needed to be rescued. However, police have now said they have found her and she is in no danger.

Over the next two days, she shared four additional videos (though only three are currently accessible), showing more bruises and ropes tied around her ankles. In one of the videos, she said that her name is Elle Sigmund and that she had been kidnapped and knew only that she was somewhere in Arkansas.

“Please I do not know where I am,” she wrote in one of the comment sections. “I know I’m in Arkansas.”

Other written comments gave further details, saying that the man who kidnapped her went by the last name Colarelli. At one point, she even insinuated that he was going to kill her and would not be posting any further videos.

The videos drew concern from viewers as they drew more and more attention, leading to folks tagging the Arkansas State Police and contacting it through other forms of social media.

While many users on TikTok begged her to call the police, Sigmund reportedly claimed that she couldn’t because her kidnapper would hear anything she said out loud. Instead, she continued sharing videos of her legs and hands in a nondescript corner of a room.

Her refusal to call police led to growing skepticism among viewers, some of whom pointed out that her bio was merely her Venmo username, and that almost a dozen people had already publicly sent her money in relation to her videos.

And according to the Arkansas State Police, there was never any reason for concern.

Sigmund would not be the first person on social media to fake a kidnapping for attention, but as of now, there are no additional details available about the case. There have also been no additional uploads on her TikTok account.