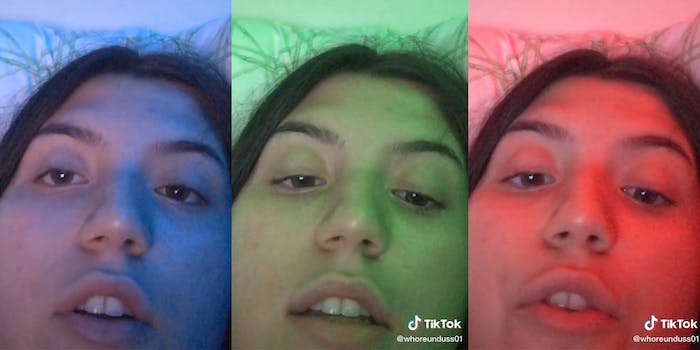 A decades-old ‘slasher’ tale is circulating on TikTok now

Women are being warned about human traffickers hiding under cars and slashing ankles. Sound familiar?

Are sex traffickers hiding under cars and waiting to slash women’s Achilles tendons so they can’t run away, and then kidnapping them?

A rumor about this very specific abduction technique has been circulating on TikTok for a few days, signal boosted by user whoreunduss01, who says in the caption “I have heard this on TikTok,” but offers no further proof. Others shared the video, which now has more than 6 million views, urging women to be careful and aware of their surroundings—always good advice.

While this scenario—a stranger slashing your ankle so you can’t run away—sounds terrifying, it’s just another iteration of the “Slasher Under the Car” tale, which has been around for decades. I remember hearing about it when I first started driving in the ’90s, and nervously looking under my car. There’s a Snopes article debunking the story, which had also grown into a scenario for alleged gang initiations in the ’90s. A 1991 article in the Chicago Tribune details the story going around college dorms. Folklorist Jan Brunvand traced it back to Fargo, North Dakota, circa 1978, but the 1970s-1990s were also a heightened period of serial rapists and killers targeting women, and this story amplified those anxieties.

There haven’t been any documented cases of people’s ankles being slashed by someone under their car, just hearsay throughout the decades, though a Nebraska man was arrested in 2016 for hiding under cars and touching women’s feet. The tendon-slashing act has been featured in films like Pet Sematary and Kill Bill.

While many people commented on the video as if it were fact, others called out the poster, with one writing, “Girls have enough to be afraid of, so please stop spreading misinformation.” The video was also posted to Twitter, where it saw more than 2 million views and a mix of shock, jokes, and debunking.

The focus on human traffickers appears to be the modern addition to the tale, and while trafficking is a very real issue, it’s highly unlikely predators are using this tactic. Last month, a woman detailed an alleged kidnapping on TikTok, showing what appeared to be bruises on her body and rope on her legs, though Arkansas police later found her safe in Missouri. There is apparently a bigger trend of TikTokkers faking kidnappings, and a recent trend of women posting from the point of view of domestic abuse victims got pushback.

More recently, the wildly popular Netflix movie 365 Days, in which a woman is kidnapped by a mafia boss named Massimo and held hostage until she falls in love with him, became a meme on TikTok. The film is way more sexually explicit than Fifty Shades of Grey, but there’s a troubling focus on young women acting out their excitement around being kidnapped and held prisoner by star Michele Morrone, strictly because he’s attractive.