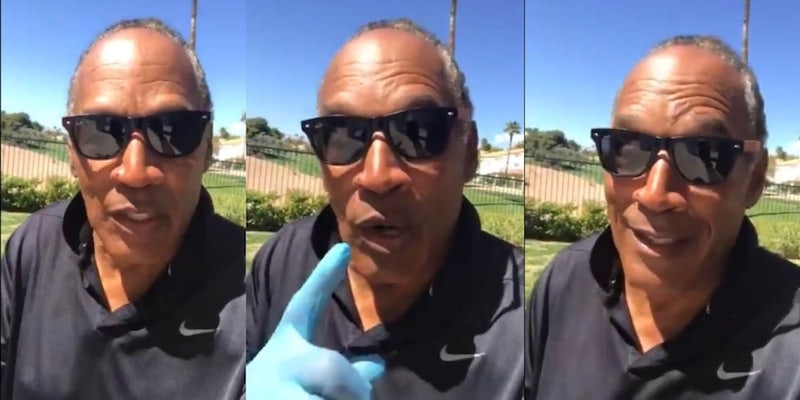 'If OJ SIMPSON said Carole Baskin did it, best f*ckin believe Carole did it.'

O.J. Simpson revealed via a Twitter video that he believes Carole Baskin, one of the subjects of Netflix’s hit docuseries, Tiger King, got away with murder—and many find it ironic.

“There’s not a shred of doubt in my mind that that lady’s husband is tiger sashimi right now,” Simpson said, referencing the theory that Baskin fed her husband to the tigers. “I’m just saying.”

Simpson recorded the video after playing a round of golf. His biggest revelation after watching Tiger King is that he believes Baskin murdered her billionaire husband, Don Lewis, who mysteriously disappeared.

Many on Twitter couldn’t help but see the dark comedy in the video considering Simpson has been accused of getting away with murder himself. In 1994, Simpson was tried for the murders of his wife Nicole Brown Simpson and her friend Ron Goldman. He was notoriously acquitted.

And the jokes just kept coming.

“O.J. Simpson and Carole Baskin locked in a house together for a month would be must-watch television,” user @dhookstead wrote.

Aside from the irony of Simpson’s revelation, others were alarmed by the former NFL star wearing a latex blue glove in the video.

“The glove!!” one user pointed out.

Simpson isn’t the only celebrity who has spent their quarantine time watching the series. Celebrities like Cardi B and Kim Kardashian have also shared their reactions to the latest streaming sensation.