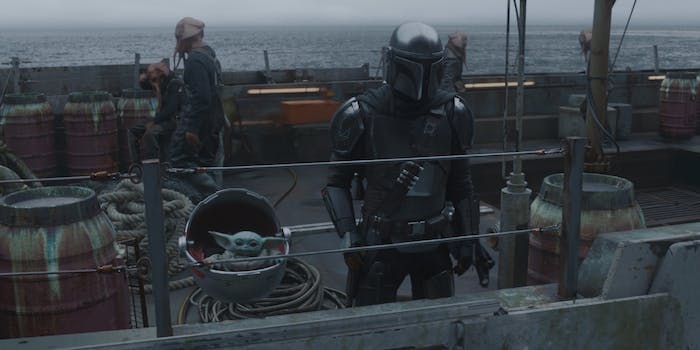 A very familiar character to fans of the animated series has arrived.

Warning: This article contains spoilers for The Mandalorian Chapter 11, “The Heiress.”

For fans of The Mandalorian who are familiar with Star Wars: The Clone Wars and Star Wars Rebels, Din Djarin’s perception of Mandalorian culture seemed a bit…off. For instance, it seemed kind of extreme that simply taking off your helmet would no longer make you a Mandalorian when two different shows gave us plenty of Mandalorians who spent considerable time without helmets and remained Mandalorian.

By introducing more Mandalorians to the picture outside of his original concave (including one incredibly familiar face and voice) in “The Heiress,” The Mandalorian revealed to everyone that, yes, Din’s perception of Mandalorian culture might be a little off.

After a red herring and a frightening diversion, Din Djarin finally encountered other Mandalorians, albeit not in the way he intended. A group of Quarren fed Baby Yoda to a mamacore and trapped Din in the cage after he went to rescue Baby Yoda so they could get his beskar. When all hope was lost, three Mandalorians flew in and rescued them. While fans of the animated shows might’ve been able to tell who was among the trio of Mandalorians by her armor, they knew for sure when all three Mandalorians took off their helmet.

Din Djarin is angry at the lot because, according to his creed, the three Mandalorians are no longer Mandalorians after taking off their helmets. He also believes that they stole their armor or found it as Cobb Vanth had earlier this season.

The red-headed woman (Katee Sackhoff) quickly attempts to disavow Din Djarin of that notion. For one, she tells him that her armor has been in her family for three generations. But for Clone Wars and Rebels fans, it means that Bo-Katan Kryze is back as she ties the larger Star Wars universe into The Mandalorian.

Who is Bo-Katan Kryze?

If you really want to get into the nitty-gritty of the inner workings of Mandalore, check out The Clone Wars, Star Wars’ seven-season deep dive into the war that took place between Attack of the Clones and Revenge of the Sith that essentially tore the Republic apart and gave Sheev Palpatine the leeway to take control of the entire galaxy. Over the course of several seasons, Mandalore became one of the series’ primary locations despite the planet being an officially neutral party.

At the time, Duchess Satine Kryze of Clan Kryze, who had an emotional connection to Obi-Wan Kenobi, ruled over Mandalore while her sister, Bo-Katan (also played by Sackhoff), was a member of the organization Death Watch, which disapproved of Satine’s pacifist approach. While Death Watch was eventually successful in wrestling power from Satine, it would result in Bo-Katan becoming disillusioned with the organization and defecting from it. Maul, who aided in the efforts with the Shadow Collective, took the true power for himself while appointing a puppet as the face of Mandalore. Then Maul executed Satine, who was being held prisoner, as a way to get back at Obi-Wan, who he desperately wanted to kill.

At that point, Bo-Katan had enough.

Why Bo-Katan would know a thing or two about zealots

“Children of the Watch are a cult of religious zealots that broke away from Mandalorian society,” Bo-Katan explained. “Their goal was to re-establish the ancient way.”

Din isn’t impressed. “There is only one way,” he replies as he attempts to Mandosplain Bo-Katan on Mandalorian culture. “The way of the Mandalore.”

Bo-Katan would be familiar with fanatics. She lived among them with Death Watch. Before becoming Death Watch, these Mandalorians were merely the losers of a civil war who were exiled to the moon of Concordia. Those who survived and clung to keeping to Mandalore’s old warrior ways formed the group, who strived to gain control of Mandalore any way they could, even if it meant teaming up with someone like Maul.

“We are the Death Watch, descendants of the true warrior faith all Mandalorians once knew,” Pre Vizsla, the Mandalorian voiced by Jon Favreau, explained in Clone Wars. “Now my people are living in exile because we will not abandon our heritage. Our people were warriors. Strong. Feared! Now they’re ruled by the New Mandalorians who think that being a pacifist is a good thing. They’ve given away our honor and tradition for peace. Duchess Satine and her corrupt leadership are crushing our souls, destroying our identity. That is our struggle.”

Children of the Watch—the name Bo-Katan gives to the Mandalorian concave that Din Djarin aligns himself with—isn’t explicitly linked to Death Watch itself; for example, we see Death Watch members without helmets and they don’t disavow each other of being Mandalorian. But it might be an offshoot of Death Watch. A potential descendant or relative of Pre Vizsla named Paz Vizsla (who is coincidentally also voiced by Favreau) appeared in the season 1 episode “The Sin” and is part of that concave, so it’s possible that in the years between Clone Wars and The Mandalorian, a faction splintered off and took its obsession of Mandalorian culture to a more literal or fundamentalist level where taking off your helmet in front of others is akin to abandoning the Way.

Liberating Mandalore under one blade

By Clone Wars’ final season, Bo-Katan wanted Maul out of Mandalore and was willing to team up with Ahsoka Tano and the Republic to do it. The end result is the Siege of Mandalore, the climactic battle between Bo-Katan, Ahsoka, and a squad of clone troopers and Maul and his force of Mandalorians. With Maul eventually captured by Ahsoka, Bo-Katan was in a position to rule Mandalore.

And then the clones executed Order 66.

When we return to Mandalore in Rebels, nearly 20 years have passed and the planet is fully under Empire control; it’s so dangerous that the Mandalorian Rebel fighter Sabine Wren is unsure that her family wouldn’t turn her into the Empire if she returned. But Sabine has the darksaber after she stole it from Maul’s home on Dathomir (and after Maul stole it from the Mandalorians in Clone Wars), an ancient lightsaber made by the first Mandalorian Jedi that has so much reverence that the person wielding it can unite a planet against any outside force. (It’s also responsible for the death of many Jedi.)

Sabine wielded it for a time, but she knew deep down that she wasn’t the person to use it to liberate Mandalore. That honor fell down to Bo-Katan Kryze, who took up the blade and led Mandalore.

There is still a major gap in the timeline between Bo-Katan using the darksaber to free Mandalore from Empire control and Moff Gideon igniting it at the end of The Mandalorian season 1.

What happened? We don’t know. All we know is that at one point, Bo-Katan had it and now Gideon has it—and Bo-Katan is more than aware of who Gideon is. And the nameless captain controlling the Imperial ship that Din helped take over was more than willing to die before revealing Gideon’s whereabouts.

By the end of “The Heiress,” Bo-Katan and Din part ways. Din, who has to meet up with Ahsoka Tano so he can reunite Baby Yoda with the Jedi, is unable to aid Bo-Katan in going after Gideon. (Din doesn’t know anything about the Jedi, so he is also unaware that most of the Jedi were wiped out with Order 66 and is almost in for a rude awakening whenever he does meet Ahsoka.)

But their paths will cross again, possibly later in the season because we know two things. One, that Bo-Katan wants the darksaber back, which is in Gideon’s possession. And two, that Gideon wants Baby Yoda, who is in Din’s possession. It’s only a matter of when and where.