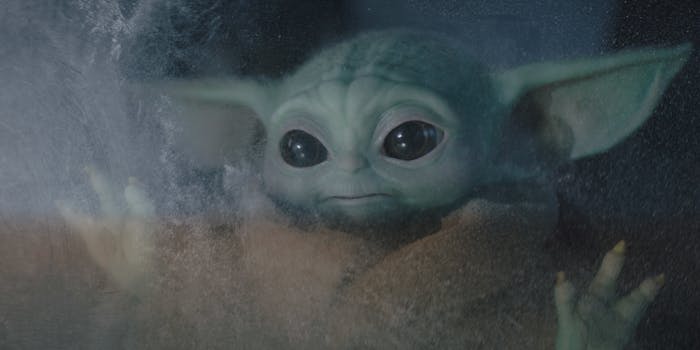 ‘The Mandalorian’ brought forth pure horror with its newest creature

If you're afraid of spiders, skip a chunk of the episode.

The flexibility that comes with The Mandalorian fully embracing the best of what science fiction and westerns have to offer gives the show the room to tell a wide berth of stories. But the latest show also showed how it can tap into horror to give us an episode with a creature that hits a little too close to home.

If you thought actual Earth spiders were bad, wait until you meet Star Wars spiders. Or, if you’re arachnophobic, wait until you have a clear chance to skip this part of the episode because while I usually don’t have issues, these spiders creeped me the hell out.

Granted, it’s not the first time that we’ve seen spiders in Star Wars. Gigantic space spiders that could kill you could’ve potentially been part of the galaxy far, far away as far back as Empire Strikes Back. There’s a famous piece of concept art by Ralph McQuarrie—who was among the first to bring George Lucas’ visions to life—that depicted Luke facing off against a creature described as a “knobby white spider” while training on Dagobah.

But for Star Wars Rebels fans, they might be more aware of krykna, six-legged spider-like creatures that lived on Atollon, the home of a Rebel base that Ezra Bridger, Kanan Jarrus, and the Ghost crew called home for part of the series. More often than not, Krykna caused problems for the Rebels; it was extremely hard to kill them or tame them with the Force, and they could sense negative emotions, which could set them off.

Now, the spiders in The Mandalorian are beasts of a different nature. They might look similar to krykna, but we don’t know if there’s any relation between them. Maldo Kreis, the ice planet where these spiders (which don’t yet have a species name) resided, also has much different weather than Atollon’s much drier and hotter climate. And while we’re not aware if a Force user could tame these spiders, the appearance of the dozens (if not hundreds) of space spiders is almost solely Baby Yoda’s fault.

How is that adorable creature responsible for the near-death of several people? Let us dive in.

After taking a back seat for much of “The Marshal,” Baby Yoda was front and center after the Mandalorian was tasked with escorting a frog woman (who’s known as “Frog Lady”) to a Trask moon so that her husband could fertilize her eggs. The problem? Mando couldn’t travel by hyperspace because that will damage the eggs. But the alternative mode of travel puts the ship at greater risk of being discovered. After attempting to evade a couple of New Republic pilots—played by executive producer Dave Filoni and Paul Sun-Hyung—inquiring about last season’s prison break, the Razor Crest crash-landed in rough shape on Maldo Kreis. And what began as a cute but disturbing side bit on the Razor Crest turned into the catalyst for the episode’s climax.

You see, Baby Yoda was hungry. Really hungry. Between the soup meme and frog hunting last season, it kinda became his thing.

(Is Din Djarrin not feeding him enough while they’re on the run? How much does food does the relatively young 50-year-old creature of Yoda’s unnamed species need to sustain itself? Should we be worried? And where does he put it? He’s tiny! )

In “The Passenger,” Baby Yoda longingly looked over at the hunk of krayt dragon meat that Peli Motto’s droids grilled at her shop. While on the Razor Crest, he popped over to the container of eggs, and he just started eating them. Despite being told multiple times not to eat the Frog Lady’s eggs, Baby Yoda kept trying (and sometimes succeeding). When Mando finally put his finger down, Baby Yoda saw a bunch of eggs chilling out nearby and went for it. He ripped one of the eggs open and started going to town.

We get it: The heart—or rather, stomach—wants what it wants. But otherwise, it was a massive mistake.

If you’re deathly afraid of spiders, you’re in the clear until around 26:35; if you see the eggs start to shake, which you can view in the GIF below, tap out.

Because the ensuing sequence of arachnid-fueled events, which essentially lasts until around 33:15 when Captain Carson Teva (Sun-Hyung) and Trapper Wolf (Filoni) offer backup firepower to take out the spiders, is a massive onslaught of spiders of all shapes and sizes. You have baby spiders like the ones that Baby Yoda ate. Spiders that could double as a steed for Baby Yoda. Spiders as big as hounds. And the mother of all spiders who was at least as big, if not bigger, than Shelob from Lord of the Rings or Aragog from Harry Potter.

A spider that—fair warning!—is so big that it can stop the Razor Crest from taking off by jumping on it and slamming it to the ground. I cannot stress this enough: If giant spiders could give you nightmares, just skip around for a few minutes.

All that for eating one baby spider. Yeesh.

In the end, Carson Teva and Trapper Wolf let Mando go for helping capture several fugitives and attempting to prevent the death of a New Republic officer. And as the Frog Lady clutches her container of eggs, Baby Yoda has clearly learned nothing as he sneaks one final frog egg.