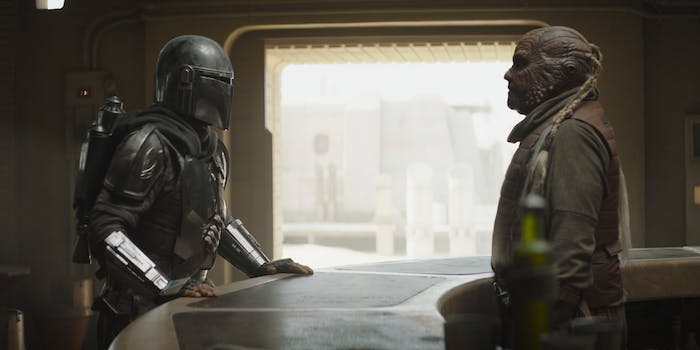 ‘The Mandalorian’ returns with a major plot twist

Season 2 is going big right off the bat.

It’s been over 10 months since Disney+ debuted a new episode of The Mandalorian, the streaming service’s runaway hit that became a surprise Emmy contender—and the lone bright spot in the Star Wars universe after The Rise of Skywalker turned out to be even more polarizing than its predecessor. Expectations for the new season have been higher than ever. The Mandalorian’s season 2 premiere does not disappoint as it indulges in both the best and the worst of its own tendencies, including the return of a character we’ve spent decades believing was dead.

But, no matter how much lore, connective tissue to the original trilogy and canonical tie-in novels, or outright cool visuals The Mandalorian has, it knows why most of us are probably watching. “The Marshal,” the season 2 premiere written and directed by Jon Favreau, sums it up rather succinctly early on in the episode after the Mandalorian (Pedro Pascal) returns to Tatooine and encounters the Peli Motto (Amy Sedaris), the mechanic we first met in “The Gunslinger.” After greeting him and trying to shoo her droids away because she recalled how much he despised droids the last time he visited, she catches sight of the Child, who almost everyone outside of The Mandalorian refers to as Baby Yoda despite Disney and Lucasfilm’s best efforts for us not to.

“Oh, thank the Force!” Peli Motto says with clear relief written on her face. “This little thing has had me worried.”

The heart of The Mandalorian’s first season was a space western that focused on a freelance bounty hunter who became an unlikely father after bonding with the creature he was supposed to deliver to the last remnants of the Empire. He might’ve been more Force-wielding MacGuffin than an actual character with proper motives at times, but his cuteness, wide and child-like eyes, and the ability to occasionally save the day (he gets tired if he overexerts himself) won most of us over. By the end of season 1, the Mandalorian was formally charged by the Armorer (Emily Swallow) with raising Baby Yoda as his own foundling until the Mandalorian either finds Baby Yoda’s own kind or he comes of age—which, given the actual Yoda lived for 900 years, who knows when that would be.

When we return to this unlikely duo, little has seemingly changed. In a scene that’s a little reminiscent of the first scene in the pilot, the Mandalorian arrives at a dangerous setting on a mysterious planet looking for something: Instead of his latest bounty, it’s information on the location of a fellow Mandalorian who can help locate Baby Yoda’s people. An Abyssin named Gor Koresh (John Leguizamo) has that information, but he wants the Mandalorian to bet on it. But really, Gor Koresh is just interested in the Mandalorian’s beskar armor and tries to sic his men on Mando; not only is it unsuccessful, but Mando also weasels the information he needs from Gor Koresh before leaving him strung up as a meal in the dark.

We might not know how long Mando and Baby Yoda have been traveling around the galaxy, but it’s been long enough that Baby Yoda knows to close his container when things are about to get bloody. (“He’s seen worse,” Mando later notes later about Baby Yoda potentially witnessing a fight to the death.) For the most part, Baby Yoda’s role in this episode is to give us as many potential reaction GIFs as possible, and in that endeavor, Baby Yoda and Favreau are vastly successful.

Star Wars’ most iconic set of armor has a new owner

Mando and Baby Yoda return to Tatooine, but it’s not just for nostalgia’s sake; that’s where the other Mandalorian is supposed to be. For everyone who’s seen Return of the Jedi, Boba Fett—the only other Mandalorian shown in Tatooine—immediately comes to mind. The thing is, we saw Boba Fett fall into the Sarlacc Pit. While many a Legends book depicts Boba somehow surviving the Sarlacc, Star Wars canon never gave us the indication that his fate was anything different than the main assumption. But is he really dead?

For much of the episode, The Mandalorian doesn’t challenge that fact. When Mando arrives in Mos Pelgo, a town that was seemingly wiped off the map but still exists, he quickly meets the man wearing Boba Fett’s armor. Instead of Boba himself, it’s a man known as Cobb Vanth (Timothy Olyphant).

Some Star Wars fans might recognize Cobb Vanth, who appears briefly in Chuck Wendig’s Aftermath trilogy as a sheriff on Tatooine who wears Boba Fett’s armor. But if you haven’t, The Mandalorian and Cobb himself gets everyone to speed, and although the story differs a little from Aftermath, the result is the same. After the destruction of the second Death Star, the mining Cobb narrowly escaped a coup by the local mining company, grabbed a camtono filled with jewels, and ran into the desert. On the verge of death, he ran into some Jawas, who traded him Boba Fett’s armor that they scavenged for the jewels, and soon after, Cobb took back the town; he now operates as a marshal.

Despite his best intentions, Cobb is essentially appropriating Mandalorian culture by wearing the armor when he doesn’t embrace the creed, and Mando wants that armor back; it doesn’t belong to Cobb. Prepared to fight for it, Mando and Cobb eventually agree to avoid the violence by helping each other out: If Mando helps him kill the Krayt dragon terrorizing Mos Pelgo, Mando can have the armor.

Back from the dead

What follows is a fairly familiar Western story with a Star Wars lens. With Mando acting as a translator and a neutral party, the people of Mos Pelgo and the local Tusken Raiders—who view each other as enemies—team up despite their misgivings to take down the Krayt dragon on the promise that afterward, they leave each other alone. It might take a couple of tries, but in the end, they’re successful. Mando and Cobb part on good terms, and we wouldn’t be surprised if he shows up again later in the season when things are about to go down.

Like last year’s premiere, the thing that already has people talking isn’t the overall episode, but rather the final shot. As Mando and Baby Yoda return to the Razor Crest with Boba Fett’s armor in tow, a mysterious figure views them from above. He’s armed with weapons used by Tusken Raiders and his bald head has several scars on it. He doesn’t speak, but we know exactly who he is when he turns around.

Boba Fett (Temuera Morrison) might not speak, but it’s a clear indication that reports of this Mandalorian’s death have been greatly exaggerated. And with his casting, The Mandalorian is continuing the trend of making Morrison, who originally played Jango Fett in Attack of the Clones, the face of all of Jango’s clones. (Boba Fett, as AOTC revealed, is a Jango clone that was given the ability to age at the same pace as a human.)

Boba Fett’s appearance raises more questions than it answers. How did he survive the Sarlacc Pit? What has he been doing on Tatooine for the past five years? Was he the person who found Fennec Shand’s body at the end of “The Gunslinger”? What will he do now that he’s seen another Mandalorian for the first time in years? Does Boba Fett subscribe to the same philosophy about a Mandalorian’s armor that Mando himself does? And if they meet, how will that play out?

Is retconning the death of Star Wars’ most famous side character completely indulgent? Definitely. Does it also open a wealth of mysteries that may or may not factor into season 2? Most certainly. But when you’re trying to reel your audience back in, it’s really all you can ask for.