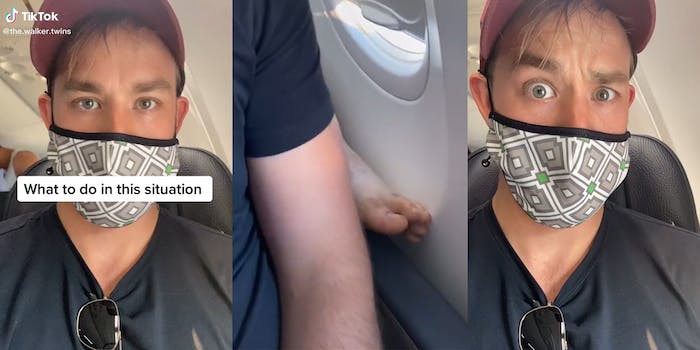 ‘I can’t think of a better solution’: TikToker’s tactic to getting foot off his armrest on plane lauded

'I'm so tired of people and their lack of respect for others.'

A viral TikTok video has provided a solution when someone invades your personal space on a plane—and commenters lauding it are showing just how strongly people feel about it.

The video comes from @the.walker.twins‘ account, which features a pair of Canadian twin brothers creating comedic content on the platform. The plane video has blown up, with more than 8 million views since being posted earlier this month.

Though clearly staged, it offers a way to combat an annoying situation for passengers in the window seat of a commercial airline—when a person in a row behind you uses your armrest as a footrest.

The video is captioned, “What to do in this situation,” and uses the Backyardigans‘ “Into the Thick of It” as a soundtrack. It shows one of the Walker brothers sitting in an airplane seat, holding up a bottle of water, and then the video pans to the armrest. On it, a bare, wiggling foot is propped up, presumably belonging to a Karen who feels entitled to that precious piece of airplane real estate.

The protagonist then pours a bit of water on the offending foot, and it’s immediately withdrawn. He then appears to smirk—only, with this being 2021 on an airplane, he’s wearing a mask, so you’re left to imagine the full expression that his arched eyebrow hints at.

Commenters on the page were thrilled to see this play out on a video. Even though it appeared to be staged, it depicts a relatable scenario for many.

“Right on,” one commenter approved. “I’m so tired of people and their lack of respect for others.”

Another suggested, “I would have sneezed and sprinkled water at the same time,” which moved the creators to respond, using the Canadian spelling “Self-defence.”

In addition to relating, people were moved by the video to praise the makers for their creative solution to this personal space problem.

“I can’t think of a better solution to get your point across,” one assessed, pun seemingly intended.

Though that didn’t stop others from generating their own suggestions, including, “I would have locked hands with it,” referring to the offending foot, “and wouldn’t have let go no matter how hard they pulled. It’s my foot now.”