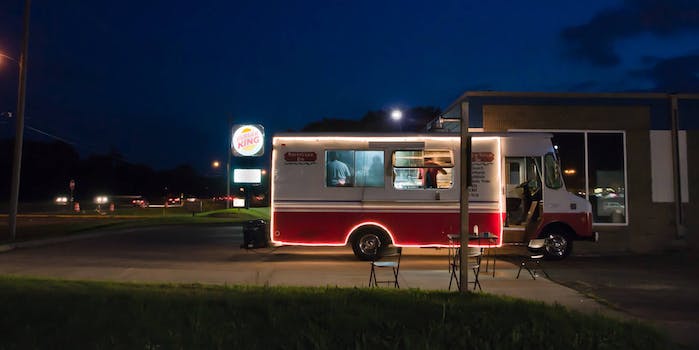 Hurry up with our damn tacos!

A Donald Trump supporter appeared on MSNBC Thursday night and made a bizarre, but tantalizing promise.

Latinos for Trump founder @MarcoGutierrez: "you're gonna have taco trucks on every corner" #inners https://t.co/Vifo3q7Ah8

“My culture is a dominant culture, and it’s imposing and it’s causing problems,” Marco Gutierrez said. “If you don’t do something about it, you’re gonna have taco trucks [on] every corner.”

His comments were meant to be foreboding, but they left the audience and host Joy-Ann Reid baffled.

“I’ll tell you what that means—the Spanish never conquered Mexico,” he said, which is 100 percent incorrect.

He added, “We have a culture that, we have a lot of good things that we bring to the United States. But we also have problems. You guys are going nuts over something, that there’s a 10th step to this problem. We haven’t even started down this path.”

New York State Sen. Adriano Espaillat, a formerly undocumented immigrant running for Congress, responded, “I don’t know what culture Mr. Gutierrez is talking about.” He added, “But I know that the Hispanic culture has a saying—a very prominent saying: Mi casa, tu casa. ‘My house, your house.’ It is a tolerant culture. It is one that welcomes neighbors in. It is one that shares their culture, their music, their folklore. It is not an aggressive or bullying culture, as was displayed by Donald Trump and his 10 points that he laid out.”

And the Internet dreams big.

Many were quick to point out that this kind of campaign platform could sway undecided voters.

I will vote for whoever promises #TacoTrucksOnEveryCorner

A taco truck on every corner and a margarita bar crawl.

THIS might just get me to endorse her. God bless America.

OMG. Can you imagine? April.. imagine with me…

*stares off into space* pic.twitter.com/9g41i9UU0m

Some were practical, wondering how taco-nomics might impact the economy.

But any way you look at it, a taco truck on every corner seems, well … divine.

Which led some to ask the inevitable.

Alas, for now we will have to continue to dream the impossible dream.

i went to my corner n there was no taco truck :(

But we will not lose hope. As our founding father Patrick Henry once said, “Give me taco, or give me death!”