On Thursday afternoon, the reality television host tweeted and Facebooked a picture of himself with a shit-eating grin, giving a thumbs up as he dug into what he identified as a “taco bowl,” allegedly cooked up at the Trump Tower Grill. The caption reads, “Happy #CincoDeMayo! The best taco bowls are made in Trump Tower Grill. I love Hispanics!”

Much like that taco bowl, there are a lot of layers to this photo that need to be discussed. Let’s unpack this hollow, desperate pandering for Cinco de Mayo (and for the Hispanic vote).

There are various reports that the Mexican cuisine at the restaurant sharing Trump’s name is total shit. Robert Sietsema over at Eater bravely tried some of the menu offerings and lived to tell the tale. He writes:

I also ordered “beef tacos” ($13.50) which turned out to be a fried tortilla bowl heaped with romaine lettuce, grated yellow cheese, and plain ground beef that was so devoid of flavor, it rendered an insult to Mexicans every bit as profound as Trump’s previous pronouncements. Trump food is bland food.

Yes, “beef tacos” in scare quotes, much as this taco bowl can only loosely be referred to as “Mexican Food.”

And if you don’t trust Sietsema, check out the Yelp reviews from common folk. To be fair, there’s a number of fine reviews for the restaurant. But the people who had problems specifically shared frustrations with south-of-the-border dishes. According to Amanda D., her chicken quesadilla was not so much a chicken quesadilla as it was just a tortilla.

She wrote: “[M]y chicken quesadilla has a few measly strands of cheese, and forget about chicken, there was none. One small bite into the corner and all the contents were gone leaving half of the slice empty. That aside, it was cold and gross. The other app we had was equally heinous.”

Understandably, she left a one-star review.

There’s no mention whatsoever of a taco bowl on the menu, and BuzzFeed’s Andrew Kaczynski confirmed this in phone call with the restaurant.

What went down? Did Trump realize that his quesadillas were shit and so asked his chefs to whip up a taco bowl for some Cinco de Mayo engagement? And seriously, a taco bowl of all things? That’s more of a white-person salad bar meal than a legit Mexican lunch.

Wikipedia says Taco Salad was invented at CA Denny's by guy named Ferguson. Hispanics do live in CA, so there's that https://t.co/InJs98Jotg

Anyway, turns out the taco bowls are actually served by the Trump Café.

3) Of course, Hispanics weren’t too pleased

We know very well how Trump feels about Mexicans and other Spanish-speaking people. He’s not afraid call them rapists or make wild allegations about the activities of undocumented people. So, of course, Hispanics let Trump know that while he might backpedal and say that he “loves Hispanics,” the feeling’s not mutual.

@MrNashington 100% legal and I don't like him and neither do my fellow Hispanics.

.@realDonaldTrump that is disgusting pic.twitter.com/znbTKXq5Z8

4) What’s the deal with that photo of his ex-wife Marla Maples on his desk?

Like, really, what the fresh hell is happening with this.

The Trump Café’s menu calls it the “Taco fiesta!” It includes “ground sautéed beef with jalapeños, onions, tomatoes, and chili spices, Served in a taco shell topped with lettuce and cheddar cheese.”

Let’s take a closer look at it. 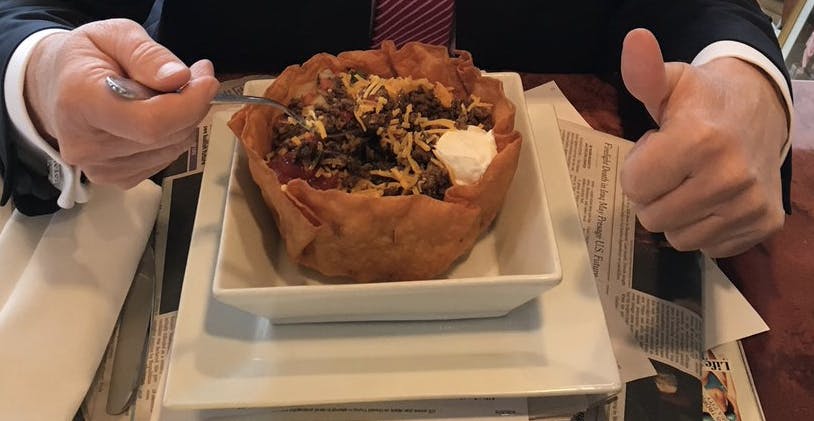 First off, taco shells are monstrosities. They’re like a white person’s attempt to make a soup bowl into something more ethnically exciting or whatever. This so-called “fiesta” just looks like a bunch of flavorless browns tossed with some other beiges into one of those heathen taco shells.

THERE ISN’T EVEN GUACAMOLE. You’d think if the restaurant was named after you, you’d get some free guac. This bowl of mush will set you back $13.50.

So, what’s your civic duty? Go vote for whichever candidate ends up duking it out with this villainous man who would dare believe that a shitty excuse for a taco bowl would get him some Hispanic votes. And go treat yourself to some actual Mexican food.