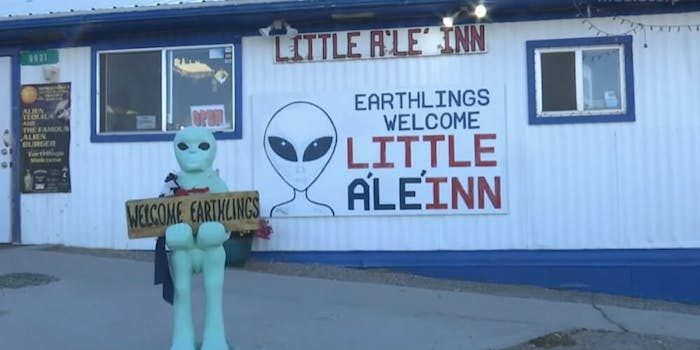 Facebook could face legal action over the Area 51 event

The festival spawned out of the infamous 'Storm Area 51' event page is caught in the middle of a hosting war.

“Aliengate,” the festival spawned out of the infamous “Storm Area 51” event page, is caught in the middle of a hosting war. And Facebook might be facing legal action over it.

The whole fiasco started when Matty Roberts jokingly created a Facebook page, titled “Storm Area 51 They Can’t Stop Us All,” on June 27. It went viral, drawing in millions of RSVPs from alien-enthusiasts who wanted to see for themselves what’s poppin’ inside the military base, long-rumored to be home to aliens.

In the weeks following, what was supposed to be a joke exploded into an internet phenomenon and birthed a music festival Roberts dubbed Aliengate. Roberts enlisted the help of Las Vegas promoter Frank DiMaggio to bring the owners of the Little A’Le’Inn in Rachel, Nevada–a hotel frequented by those interested in discovering more about Area 51–onboard. The event was supposed to be held on the weekend of Sept. 21.

In an interview with ABC Arizona, Roberts said he was worried the event would end up being “a disaster.”

“We don’t have a good feeling about people going out 150 miles into the desert without the resources that they need,” DiMaggio added.

The pair decided to host their event in another “safer” location–Las Vegas, Nevada.

However, that hasn’t stopped Connie West, the owner of Little A’Le’Inn in Rachel, from planning to host the same event in the original location–permits had already been approved and the business was in the midst of selling parking and camping sites to excited fans. West has also already contracted a Las Vegas ambulance company to provide any necessary medical care, in the event that it is needed. Even though she was slammed with a cease-and-desist letter, which told her to stop using the “Alienstock” name for her event, the show will still go on. Musical acts have already been booked for the event, though it is unclear just how many will be in attendance.

That uncertainty is exactly what has local officials concerned. As of right now, people have already begun to trickle onto the site–and with no idea how many will show, authorities are expected to spend as much as $250,000 to cover the event.

“I’m not happy about it because you’re looking at a county that does not have a lot of financial resources and this could potentially cost the county,” Lincoln County Sheriff Kerry Lee told Gizmodo. “The county could still be spending upwards of a quarter of a million dollars and that’s not including the salaries of all these 300-plus first responders that are coming here.”

To recoup those losses, Lincoln County authorities want to sue Roberts and Facebook. According to reports, Lincoln County District Attorney Dylan Frehner is considering legal action against Roberts and Facebook on the grounds that the event promoted “unlawful” activity. Though Section 230 protections typically make it impossible for the platform to be held accountable for what others publish, it does not apply in cases where laws are broken. In this case, planning to storm Area 51 is a pretty clear breach of the law.

As the end of this tale unfolds, more answers will emerge. How many will descend on the small town of Rachel? Will anyone actually try to storm Area 51? And will the Las Vegas event take off?

For now, it is all a mystery, just like what resides at Area 51.