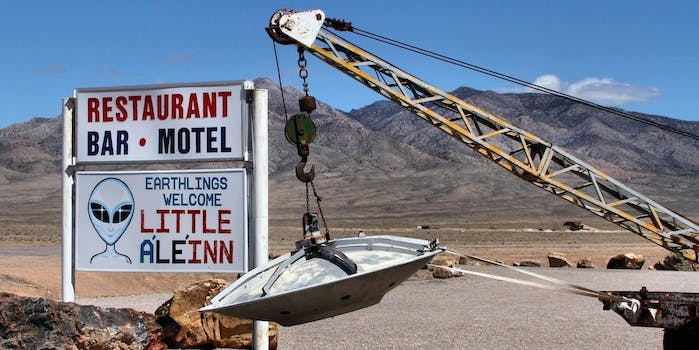 No-fly zone implemented over Area 51 ahead of Alienstock festival

The Federal Aviation Administration (FAA) has implemented a no-fly zone over Area 51 in anticipation of Alienstock, the Facebook meme-inspired music festival taking place Sept. 19 to Sept. 21.

The festival is set to take place in Rachel, Nevada, the rural town of 54 people, according to the 2010 census. After 2 million people replied “yes” to Alienstock on Facebook, the FAA stepped in, CNET reports.

The FAA notified all air traffic of “temporary flight restrictions for special security reasons.” The bans take place south and west of Rachel and will last from Sept. 18 to Sept. 23, according to CNET.

Alienstock is the result of the overwhelming response to a Facebook event called “Storm Area 51, They Can’t Stop All of Us” page. Matty Roberts, 21, has said the Facebook event was satirical.

But Roberts’ “Storm Area 51” page inspired a wave of memes and drew widespread attention to Nevada’s classified Air Force facility. With thousands of people saying they would head to Nevada in late September, Roberts and a local hotel owner, Connie West, collaborated to plan the Alienstock music festival.

Roberts later backed out and called Alienstock a “FYREFEST 2.0.” Robert said the organizers expected some 10,000 attendees. He is now hosting a free Area 51-themed party in Las Vegas on Sept. 19.