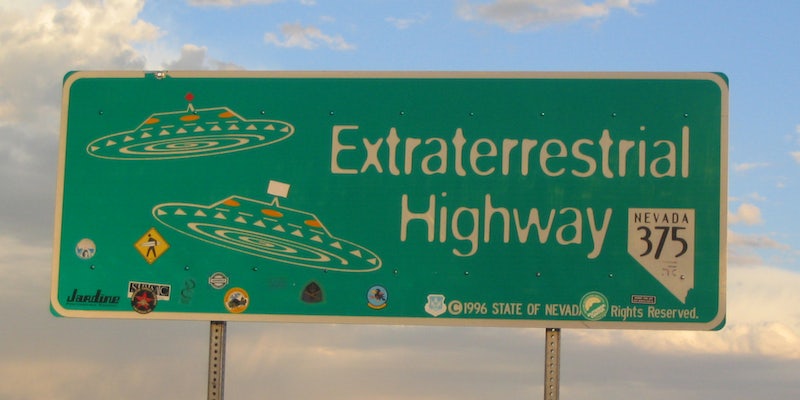 How local hotel owners are prepping for ‘Storm Area 51.'

If you were hoping to join the raid on Area 51 and “see them aliens” on Sept. 20, you might be too late. Proactive raiders have already snatched up hotel rooms and Airbnbs close to the secretive military facility.

Almost 2 million people have RSVP’d to the Facebook event titled “Storm Area 51, They Can’t Stop All of Us,” reinvigorating conspiracy theories and inspiring endless memes. The event’s creator, Matty Roberts, has said that he was kidding about the plan to “naruto run” onto the military facility at the Nevada Test and Training Range. But folks who seem serious about raiding have planned their accommodations.

The Little A’Le’Inn in Alamo, Nevada, has been operating since 1988 and famously made appearances in the 2011 film Paul and TV series The X-Files. The inn is co-owned by Pat West and her daughter, Connie West, who told the Daily Dot the inn is “booked solid” for the weekend of Sept. 20. West said this will be “incredible” for business, although the logistics may be tricky in the small town of Alamo, which is 10 miles from Area 51 and 100 miles from Last Vegas.

“We’re just a teeny tiny place on the side of the highway,” West said. “We’re well known, yes, but that’s a lot of people. Even if it’s only 1% [of people who RSPV’d], it’s still a lot of people to have to deal with. We’ve never had to deal with anything like that before.”

No matter what the raiders try to do, West said she plans to have ready accommodations such as open campgrounds, showers, and water stations.

“I think they’re crazy for trying to get in, and I think it’s kind of disrespectful,” West said. “But they want to come here.”

AirSunset View Motel owner and general manager Pamela Broxson said she has been inundated with calls and bookings for the week leading up to Sept. 20. Her motel is also located in Alamo.

“I thought it was a joke,” Broxson said. “I’m getting more and more each day booking rooms for that specific weekend in September.”

Broxson said a good portion of her business already comes from people looking to see something, “some signs,” out near the base. But she said the prospect of storming a military base in the middle of a desert is “crazy.”

“I’d say they’re about out as far out as the aliens are,” Broxson said. “I mean I’ve seen people go out there and get drawn upon. There’s sensors everywhere so I think it’s gonna be interesting. I’d like to videotape it.”

The Daily Dot previously reported that Roberts, creator of the Facebook event, spoke with Nevada news outlet KLSA-TV about the page. He told KLSA-TV that he is worried the FBI might get involved and that the page was created with satirical intentions.

“I posted it on like June 27th and it was kind of a joke. And then it waited for like three days, like 40 people, and then it just completely took off, out of nowhere. It’s pretty wild,” Roberts told the news outlet.

The Air Force has made clear that it’s taking the threat of a raid seriously. Air Force spokeswoman Laura McAndrews told the Washington Post that armed forces would “be protecting” the military base.