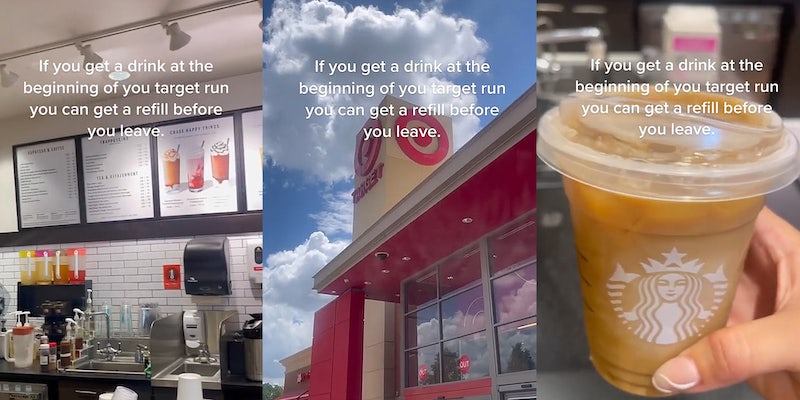 ‘If you get a drink at the beginning of your Target run’: Shopper issues PSA to Target shoppers who get Starbucks in viral TikTok

'Another excuse to go to Target.

In a viral TikTok video, a woman revealed to many that some Target shoppers can get a refill on their Starbucks drinks.

Posted by Andrea Ariza (@andrearizatips), the short clip starts by showing the outside of a Target. From there, it shifts to Ariza going to the Starbucks and getting herself and someone else a drink. The overlay text reads, “if you get a drink at the beginning of you Target run you can get a refill before you leave.”

“Another excuse to go to target,” Ariza captioned the video.

The video has been viewed 7.4 million times since it was posted on July 23. People in the comments section warned that the free refills have stipulations.

“ITS ONLY FOR BREWED TEAS AND COFFEE AND YOU NEED TO HAVE THE STARBUCKS APP,” one said.

And while this was news for many people, who commented things like “Is this real?” and “I feel like I’m being baited,” a Starbucks representative confirmed it is semi-true in a statement to the Daily Dot back in 2021 after another video revealing the “hack” went viral. They also clarified the rules regarding this policy and said the perk only extends to members of the Starbucks Rewards loyalty program.

“Starbucks Rewards members may receive free refills of hot or iced brewed coffee or tea during the same store visit at participating Starbucks stores including licensed stores located in Target, while supplies last,” the Starbucks representative said at the time.

The Daily Dot reached out to Andrea Ariza via TikTok comment and email.