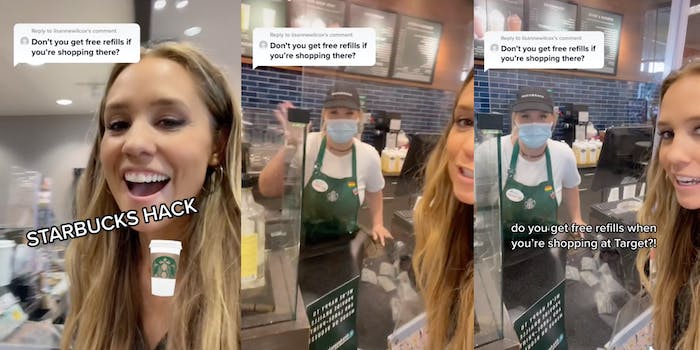 These days there’s a Starbucks on nearly every corner.

The popular coffee shop is also nestled inside nearly every Target location, making it a convenient stop for shoppers in need of an energy boost. According to a recent TikTok, there’s even a bonus for Starbucks fans who obtain their coffee from within a Target location: free refills.

The viral TikTok, posted to the @bestoftarget account, sees a young blonde woman test this theory by going directly to the source. At the request of a commenter, the woman makes her way over to the Starbucks counter and asks a barista if “you get free refills with your Starbucks if you’re shopping at Target.”

The answer takes her by surprise. The barista immediately confirms that yes, free refills are available for Starbucks customers shopping at Target. There is a catch, however. This rule only applies to customers enjoying a regular hot coffee, iced coffee, or iced tea. Any of the fancier items will continue to cost you.

Still, the confirmation of free refills was news to many viewers. They expressed regret at not knowing this beforehand, and reminisced on all the wasted opportunities to vibrate their way through Target in an over-caffeinated daze.

A number of commenters were unimpressed, however, and pointed out that the revelation wasn’t news to them. They also claimed that the rule applies beyond Target. They noted that “every Starbucks,” not just those within Target, provide free refills on those three menu items. But there’s another catch, they say: You have to be a gold member.

Viewers claim that regular customers are out of luck on the caffeinated IV drip, but anyone with a gold Starbucks membership can get free refills on hot coffee, iced coffee, and iced tea at any Starbucks location, as long as they stay put. Leaving the location, polishing off your coffee, and returning isn’t going to cut it. For customers who take to Starbucks for their study binges or work calls, however, you can keep the coffee flowing until all your blood has been replaced by that sweet, sweet java.

Several of the commenters who claimed knowledge of the Starbucks policy claimed to be former or current employees of the coffee giant.

Update 9:21am CT Aug. 15: When reached for comment, Starbucks confirmed in a statement to the Daily Dot that “Free refills is a benefit of the Starbucks Rewards loyalty program. Starbucks Rewards members may receive free refills of hot or iced brewed coffee or tea during the same store visit at participating Starbucks stores including licensed stores located in Target, while supplies last.”