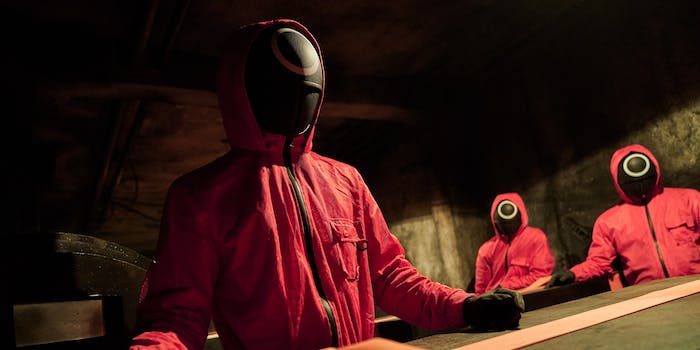 It was causing major problems.

Squid Game‘s explosive success is great news for almost everyone involved: Netflix, the show’s creators, and the audiences who get to enjoy some thrillingly clever TV. But Squid Game has at least one unintentional victim: A South Korean woman whose IRL phone number accidentally appears on-screen.

The show takes place during a deadly contest where people compete to win a massive cash prize. During some earlier scenes in the first two episodes, we see the contestants being recruited using a mysterious business card. But instead of featuring a fictional phone number (like the many American movies that use the area code 555), Squid Game used a real one by mistake.

As Squid Game grew in popularity, the phone number’s owner began to make the news, with Reuters reporting that she’s a small business owner named Kim Gil-young. She found herself inundated with prank calls and requests to participate in Squid Game‘s contest. And there was no sign of the problem dying down because the show is currently on track to be the most popular Netflix series of all time.

Kim Gil-young was reportedly reluctant to change her number because it was attached to her business, and Korea’s restrictive telecommunications laws make phone numbers a limited resource. She also told the press that she’d turned down an offer of compensation for the number problem, claiming she’d been offered 1 million won ($840).

In a statement shared on Wednesday, Netflix said it was now working with Squid Game‘s production company to “resolve this matter” as soon as possible, including making some minor edits to the show. They’re expected to cut the shots where the number is visible on-screen. It’s pretty unusual for a show to be altered after its release date like this, but streaming services obviously make it easier. One famous example would be the Starbucks cup that HBO hastily edited out of Game of Thrones in 2019; a more low-stakes error than Squid Game‘s phone number issue.