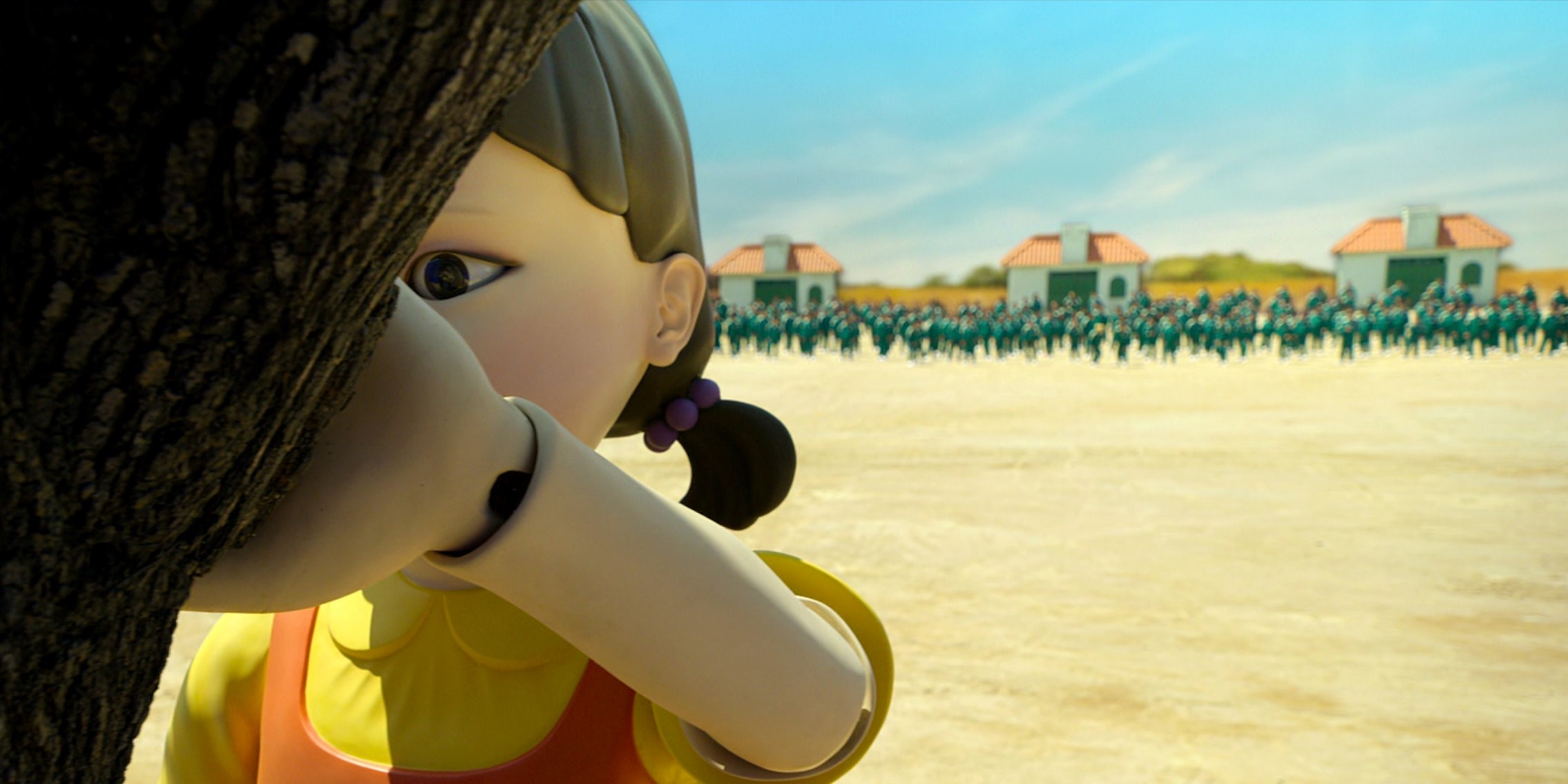 Why everyone needs to watch Netflix’s ‘Squid Game’

This Korean thriller series is an electrifying satire of modern capitalism.

This review includes no major spoilers for Squid Game.

Watching Squid Game, I kept thinking about the psychology of casino design. Slot machines are the classic example; a simple game that provides a hypnotic kind of stimulation. Using cheerful music, flashing lights, and jingling coins, these machines turn small victories into a habit-forming sensory rush, overshadowing the likelihood of longterm losses. Video game designers utilize similar strategies to make loot boxes as addictive as possible. In Squid Game, this effect arrives in the form of a gigantic perspex piggy bank, descending from the ceiling with a fanfare of casino noises. It’s the prize in a high-stakes gamble involving human lives.

The main characters of Squid Game are contestants in a perverse kind of game show, offered a simple choice: Return to the drudgery of their lives, or risk death to win the contents of that piggy bank. At first, the answer seems obvious. Out of 456 contestants, only one can win the prize while the rest will probably die. They should clearly go home, a decision they can collectively make by democratic vote. But as the piggy bank emerges like a gleaming pop-art deity, lit with a shiny golden glow, these desperate gamblers can’t help but be seduced.

Created by writer/director Hwang Dong-hyuk, the Korean thriller series Squid Game is an international hit for Netflix, spreading by word of mouth (and word-of-TikTok) while also garnering critical acclaim. Blending survival horror with social commentary, it explores the ways in which capitalism turns people into monsters—while also being extremely entertaining TV.

Lee Jung-jae stars as Seung Gi-hun (contestant #456), a deadbeat dad who’d rather gamble on horse racing than pay off his debts. At his lowest ebb, Seung Gi-hun meets a stranger with a suspiciously perfect solution to his financial woes: A secret contest where people can win cash by playing children’s games. Naturally, the offer is too good to be true. Along with 455 similarly desperate “volunteers,” he’s inducted into a sadistic psychological experiment, surveilled by masked guards in a bizarrely designed prison. If a contestant loses a game, they get shot in the head. If they win, they return to a grim dormitory where the only decoration is that giant piggy bank, reminding contestants what they’re fighting for.

This project clearly has a super-rich benefactor, not just because of the prize money (456 billion KRW, or $38 million) but because the games are exquisitely designed for an unseen audience. There’s a perverse beauty to the show’s aesthetic, adding visual flair to a series of conflicts echoing familiar psychological buzzwords: the trolley problem, sunk cost fallacy, the Skinner Box. Western viewers will likely be reminded of The Hunger Games, although Squid Game is more both more sophisticated and more direct.

Some of the main characters are criminals, like the compellingly hateable contestant #101 (Heo Sung-tae). Others have vulnerable relatives to support. One is a North Korean defector (Jung Ho-yeon). They were all recruited because they’re tormented by debt. Divided equally, the prize money would solve most of their problems outright. But the system only wants one person to win, and in order to become super-rich, you have to make other people suffer. First indirectly, and eventually face-to-face. While Seong Gi-hun’s introduction portrays him as a self-destructive loser, we’re forced to reevaluate as he reacts to increasingly extreme moral choices. But no matter how violent and wretched the contestants become, the true villains are the people in charge.

It’s easy to see why Squid Game is such a hit. The allegory is accessible without being overly didactic, and the psychological drama is electrifyingly well-articulated, playing off the dynamics we see in Big Brother-style reality shows. Some contestants are obvious villains from the start, but most of them are just flawed, sympathetic people trying to survive. They form uneasy alliances and wrestle with their own moral limits. And this all plays out amid an eerily memorable backdrop; a bleak prison decorated in lurid colors to resemble a children’s playground.

Several Western media outlets have awkwardly compared Squid Game to Parasite, although there’s barely any similarity beyond the theme of dystopian capitalism, and the fact that they’re both Korean. Instead, it’s perhaps more interesting to examine a prevailing trend regarding which Korean movies become popular in the US. Over the past few years, films like Snowpiercer, Burning, Train to Busan, and Space Sweepers (and, yes, Parasite) have all attracted an American audience; a list that ranges from serious drama to blockbuster action to zombie horror. The main point of overlap is their straightforward depiction of class struggle, featuring characters whose lives are controlled or ruined by malevolent one-percenters. This kind of story is largely absent from American pop culture.

Sure, Hollywood loves a cool billionaire villain. Dystopian media is also extraordinarily popular. But mainstream movies avoid direct criticism of capitalist structures. We rarely see depictions of genuine poverty unless we’re watching a hard-hitting indie drama, or a rags-to-riches story about the American Dream. These days even the working-class hero Spider-Man has corporate funding. Debt is a downer; Hollywood prefers aspirational imagery. So audiences must look elsewhere. Squid Game is thrilling and original and full of gripping emotional twists—and despite being a big-budget Netflix show, it also feels subversive in our current media landscape. It offers a kind of catharsis we’re hungry to see, wrapped up in a very enticing package.