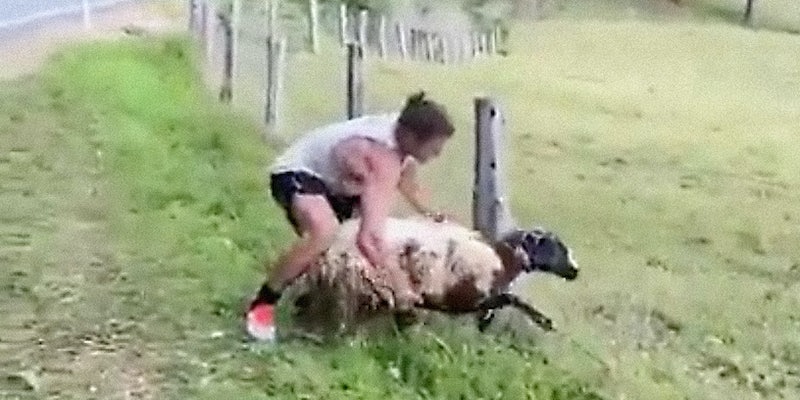 He removed the sheep from wire and got him over the fence by himself.

On Sept. 20, Nick Cummins—a former Australian rugby player who’s since appeared on several reality shows including Australia’s version of The Bachelor—posted a video of himself taking matters into his own hands to remove a sheep whose head was stuck in a wire fence. “In [New Zealand] this would have gone down very differently,” he wrote.

For Cummins, that involved some maneuvering, but once the sheep’s head was out of the fence, he flipped the sheep over and held it by its front legs so it would calm down. Using little more than brute strength, Cummins managed to swing the sheep’s body over the fence so it could run away, resulting in a bleat from the sheep as it did just that.

“You’re welcome,” he replied as he saluted the sheep.

The video soon made its way to Twitter, where a copy of Cummins’ video has been viewed nearly 7 million times. Some people instantly recognized Cummins, who’s had many memorable interviews and TV spots over the years. But for the most part, if you’re not tuned into Australian reality TV or rugby, you might not know who Cummins is; for those people, it’s a video of someone in incredible shape moving a sheep around with little more than his bare hands.

Well, the internet has a lot of thoughts about that. Some saw something comforting in how Cummins handled the sheep.

And others pointed to the video as a positive example of masculinity in action.

But there was also plenty of thirsting and amazement toward Cummins himself.

It’s sometimes hard to guess what will capture everyone’s attention online, but sometimes, the wholesomeness of a sheep video will just ram its way through the noise.