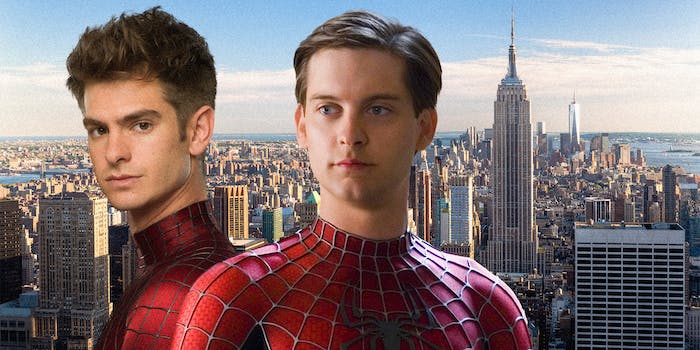 Is Marvel planning a live-action ‘Spider-Verse’?

Andrew Garfield and Tobey Maguire may be in talks to reprise their 'Spider-Man' roles.

Rumors are swirling about Andrew Garfield and Tobey Maguire appearing in the sequel to Spider-Man: Far From Home, with Sony releasing an ambiguous response: “Those rumored castings are not confirmed.” As Coming Soon points out, this phrasing isn’t an outright denial. It suggests that the actors may currently be in talks to reprise their roles, and Sony doesn’t want to jump the gun. Most of the time, studios don’t comment on random casting rumors at all.

The idea of a Garfield/Maguire comeback is leading to speculation about a live-action version of Spider-Man: Into the Spider-Verse, featuring several versions of Peter Parker from different universes. This would be a bold departure from the more conventional superhero stories of the first two Tom Holland movies, but there are more clues to back it up, starting with Marvel‘s upcoming sequel to Doctor Strange.

Directed by the original Spider-Man trilogy filmmaker Sam Raimi, Doctor Strange in the Multiverse of Madness is expected to introduce (you guessed it!) the Marvel multiverse. This opens the door for the MCU to introduce characters from alternate canons, much like how there are numerous Marvel timelines in comic book canon. In other words, this could be how Disney introduces the X-Men and the Fantastic Four into the main Avengers universe.

A couple of weeks ago, we learned that Doctor Strange will appear in the sequel to Spider-Man: Far from Home, replacing Tony Stark as Peter Parker’s mentor. Jamie Foxx will also reprise his role as Electro from the Amazing Spider-Man franchise, which concluded in 2014 and isn’t connected to the MCU. Reading between the lines, this means Electro will probably arrive via whatever multidimensional hijinks happen in the next Doctor Strange movie. And that’s how we (in theory) end up with a Spider-Man movie featuring Tom Holland, Tobey Maguire, and Andrew Garfield.

There’s a potentially awkward undertone to the idea of a live-action Spider-Man: Into the Spider-Verse. Multiverse crossovers are a long-running trope in superhero comics, and we’re starting to see more live-action adaptations like DC TV’s epic Crisis on Infinite Earths event, and the upcoming Flash movie, which will “reset” the DCEU with multiple superheroes from different movie canons. But in the case of Spider-Man, Into the Spider-Verse was a critically acclaimed gamechanger… and a live-action crossover could easily seem like a ripoff. It also invites obvious comparisons between a movie starring a Black Puerto Rican hero, and the possibility of a Marvel Studios equivalent starring three white Peter Parkers and Benedict Cumberbatch.

Obviously, this is all speculation right now, but the signs do point toward a Spider-Man multiverse crossover. It could signal an ambitious new direction for Hollywood superhero movies, digging into the more complicated side of comic book canon. At the same time, many fans will be underwhelmed by the idea of a Tom Holland film that borrows heavily from Into the Spider-Verse—especially since Spider-Man: Homecoming already stole Miles Morales’ best friend and high school environment from the comics.