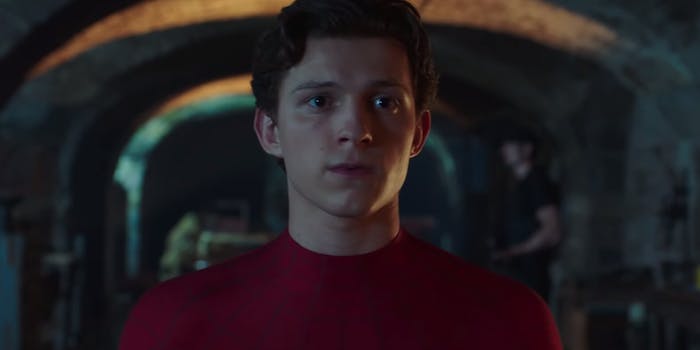 Last week, Tom Holland announced the highly-anticipated third film in his Spider-Man run. Now, a leak originally posted to 4chan by someone claiming to be a “Marvel insider,” according to the Independent, included details on the film’s title, cast, and villains.

After a contentious back-and-forth between Sony and Disney—Marvel’s parent company—a November deal ensured that Holland will portray Peter Parker in another Spider-Man film and at least one other Marvel Cinematic Universe release. While speaking with the Inquirer, the 23-year-old actor announced that both he and Zendaya would return to their roles for the upcoming film, the plot for which is “absolutely insane.”

We already knew that the film is scheduled to release on July 16, 2021. We also knew it would be directed by Jon Watts, the same director that tackled the first two Holland-helmed Spidey films. What we don’t know: The film’s title, villains, or any major plot points. After the viral 4chan post, that may have changed.

In keeping with the first two film’s titles, the third release is reportedly set to be titled Spider-Man: Home Run. Considering how Far From Home ended, the “run” part of that title is particularly interesting. The second film’s final moments saw Peter Parker revealed as Spider-Man and framed for the death of the villainous Mysterio.

The leak also reportedly revealed two major villains: Kraven and Scorpion. If the leak can be trusted, filmmakers are eyeing Henry Cavill to tackle Kraven, a longtime favorite among Spider-Man villains. No one has been specifically named as a potential for Scorpion, but some fans have a theory.

On March 7, Better Call Saul actor Michael Mando sent out a very odd tweet. Wordless, it featured only a photo of Mando with a desert back-drop and, in place of a caption, a scorpion emoji. The tweet immediately sparked rumors among fans that Mando was tapped to portray the iconic Spider-Man villain.

The leak points to two other actors as potential additions to the film as well. Stranger Things’ Joe Keery and Glee‘s Jane Lynch may be among the movie’s lineup, though no characters have yet been linked back to the actors.