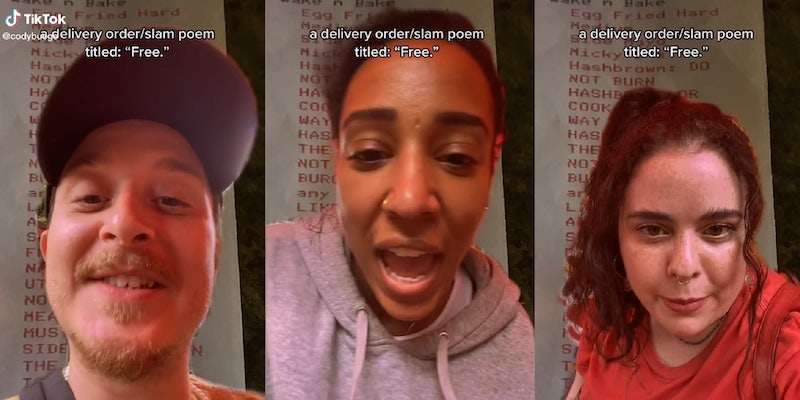 'I would have hit decline faster than it took them to feel good about sending that.'

A TikToker went viral this week after posting a dramatic reading of a customer’s highly specific order to the platform.

The TikTok, posted by user Cody (@codybuege), shows the poster and friends reading out the order. The customer’s incredibly detailed demands include peculiarities such as “Egg Fried Hard Medium,” “DO NOT BURN HASH BROWN OR COOK ALL THE WAY HARD,” and “add ANY FREE SAUCE LIKE KETCHUP, MUSTARD OR SEASONINGS. FREE.”

Quotes like these led to quick virality, with the TikTok accumulating over 30,000 views in just a few days.

According to the text overlay, they named the poem “Free.”

The restaurant in question appears to be New York’s Harlem Public, with the order in question being a take on their “Wake N Bake” burger. The burger generally comes with New York cheddar cheese, brown sugar bacon, “drippy” egg, and a “Micky D’s” hash brown on a Brooklyn soft roll, per the restaurant’s website.

Harlem Public also has an option to build your own burger, a possibility that the orderer apparently ignored in favor of excessively modifying an existing menu item.

In the comments section, viewers shared their appreciation for the video and confusion about the order itself.

“The way she started like a poetry slam,” one user wrote.

“I love how it also seems they had the option to not type in all caps, but did so anyway so you know they’re serious,” another added.

“Beginning sounding like a shein product,” a third laughed.

Soon, the conversation shifted to discuss the topic of hyper-specific orderers in general and how restaurant workers wish they could respond to them.

“Who’s gonna tell them I am gonna charge extra for having to read that,” one commenter said.

“I would have hit decline faster than it took them to feel good about sending that,” a second detailed.

“I hope y’all threw all of it in a box shook it up and gave it to him,” a third shared.

Naturally, this video struck a nerve with servers.

“The cooks in my kitchen would walk out before that ticket would finish printing,” a commenter claimed.

“AS A SERVER IM SCREAMING,” another user wrote. “I FEE[L] LIKE YOUR THE CHEF YELLING AT ME.”

Update 10:48am CT, June 2: When reached for comment, Cody told the Daily Dot that while the order was fulfilled, the customer who placed it is no longer welcome to order from the restaurant.

“What’s crazy is what this customer wanted wasn’t all that hard…Sometimes how you say something is everything. She’s literally trying to yell at staff through receipt text,” Cody said via direct message. “I called her and left a message that we would have to charge her for extra sauces and the lettuce tomato and onion she wanted…No response.”

“She is not welcome to order anymore,” Cody continued.

Orders like this have also caused a change in the restaurant’s order acceptance process, Cody said.

“We’ve been notified by management to just cancel orders like this now,” Cody said. “They tend to be people who cannot be satisfied and they often just debate the charge and get their money back.”