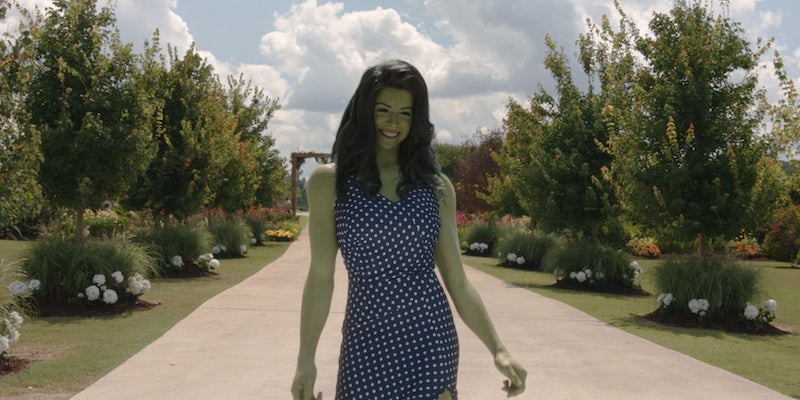 ‘She-Hulk’ puts its spin on the sitcom wedding

There's never a convenient time for a wedding.

Two-thirds of the way through She-Hulk’s first season, it’s steadily going through the sitcom gambit. We’ve seen it take on the workplace, the superhero showcase, the zaniness of the courtroom when you bring in people with powers, and just how a superhero might navigate dating in a modern world when you’re both a woman and someone whose love interest wasn’t thrust upon them in a Marvel movie. But She-Hulk managed to cross another sitcom staple off its list as it starts turning its attention to a larger threat.

Is there really a good time for a wedding (and, therefore, a wedding episode)? If it’s a show that can determine the number of episodes in a season, what it covers, and the length of an episode, sure. But Jen Walters (Tatiana Maslany) says no, so presumably we’re made to think that as well. And in the world of She-Hulk, it’s a really inconvenient wedding, too—it’s on a Thursday.

Jen lost touch with her old high school friend Lulu (Patti Harrison) ages ago, but, for some reason—Jen suspects obligation—Lulu asked Jen to be a bridesmaid, giving her no room to say no. The package telling Jen she’s a bridesmaid looks like Party City vomited in Jen’s apartment, and the wedding itself isn’t much better. Lulu’s bridezilla tendencies are immediately off-putting:  Her pointed comments about Jen only having a few more years seem to be designed to hurt in the way that people you’ve known for ages can expertly wield; once the staff quits, she orders Jen around to clean up their mess and iron shirts; and the groomsman she’s paired with is a literal dog. (In some cases, a dog groomsman might actually be preferable to the human one, but it’s absolutely meant to be insulting toward Jen.)

And unlike Jen’s bosses, her dates, and the rest of the world, Lulu doesn’t actually want She-Hulk at her wedding because She-Hulk will out-stage the bride. Which then becomes a problem when Titania (Jameela Jamil) arrives as the plus-one of the human groomsmen and is still mad about her defeat in court. Stuck with only a cash bar and all of the horrible wedding clichés you can imagine, Jen gets drunk fast, leaving her to be no match for Titania. But fighting Jen, who is no match for Titania’s strength until she can finally turn into She-Hulk, is boring, so she waits for Jen to focus long enough to get a hold of it.

While Jen is getting plastered, Nikki (Ginger Gonzaga) and Mallory (Renée Elise Goldsberry) are left with the case-of-the-week. It’s a divorce case, but in Mr. Immortal (David Pasquesi), a superpowered being who cannot die, it gets complicated. Whenever he wants to end the marriage with a spouse, he kills himself. Mr. Immortal can’t die, so when he falls, he can put himself back together, but in the legal sense, he’s dead enough to resolve the marriage.

“Let me get this straight. Are you saying that instead of having a conversation with your wife, you kill yourself to get out of the relationship?” Mallory deadpans.

Unfortunately for Mr. Immortal, one of his ex-spouses found a video of his “death” on Intelligencia—a Reddit-like site that Mallory calls “the one for hateful manbabies”—and found all of his other spouses who want revenge, at least a monetary one. And they get it, but not without some clever negotiations on Nikki’s part; sometimes, a victory comes with just not getting arrested.

But the introduction of Intelligencia into the show gives Nikki and Mallory an idea to see what people have said about She-Hulk on the site. If you’ve seen the online backlash to She-Hulk, it’s somewhat similar to that, except maybe with more death threats mixed in. Mallory doesn’t think it’s a good idea to tell Jen, but Nikki immediately backtracks on her promise and leaves a voicemail for Jen, who’s bonding with Josh, the seemingly one guy who likes both Jen and She-Hulk.

But is he genuine, or is he part of something bigger? As they chat, a lab spies on them as scientists prepare and package a needle and vials as the bent one used on She-Hulk a few weeks back is visible in the background. This time, the new needle looks like it’ll pierce through a Hulk.