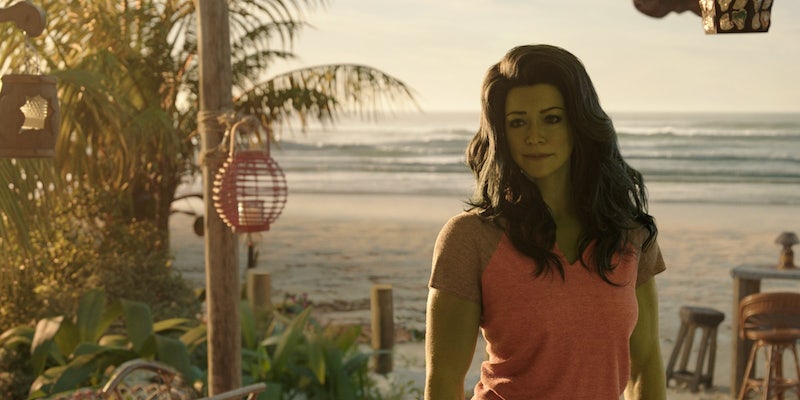 Jennifer Walters (Orphan Black’s Tatiana Maslany), the lawyer-turned-Hulk at the center of She-Hulk: Attorney at Law, just wants to do her job; she knows exactly what she’s capable of and does the proper prep for each case. But in the first episode of She-Hulk, she—and the creatives behind it—also make plenty of space for Jen Walters’ She-Hulk origin story, one that’s rife with self-deprecating humor and commentary about the reality many women face in the real world.

In a fourth-wall-breaking narrative device popularized by Fleabag (and is an integral part of the Dan Slott She-Hulk run that inspired the show), Jen acknowledges that “you’re not going to be able to focus on this fun lawyer show until you know all about that.” The particulars of the case that Jen has to argue don’t really matter. Already in the know about Jen’s alter-ego is paralegal Nikki Ramos (Ginger Gonzaga), who jokes that Jen should just bring the Hulk out for her closing statement.

Most of “A Normal Amount of Rage” flashes back to a few months ago to a road trip Jen took with her cousin Bruce Banner (Mark Ruffalo). The show does a good job of setting Bruce and Jen up as cousins who’ve long lightly ribbed one another with breezy dialogue, and the chemistry between Maslany and Ruffalo does much of the legwork to set up a family dynamic we’re only just learning about in the MCU. (Comics fans will have long known about them being related.) Besides, Jen has a lot of thoughts on the long-running Marvel fandom debate on whether Steve Rogers was still a virgin. (More on that later.)

A spaceship appearing in front of them causes Jen’s car to go over a railing—Bruce later identifies the ship as a Sakaaran Class-Eight courier craft (which previously showed up in Thor: Ragnarok and Avengers: Infinity War)and adds that “they’re probably trying to deliver a message”—and Bruce’s blood ends up getting into a cut on Jen’s arm. The transformation is instantaneous, although Jen doesn’t remember much from that first time. The second time, after a group of women help Jen look presentable after stumbling into a bar without shoes on, is in response to a group of men who refuse to ignore Jen’s desire not to talk to them or even her insistence that she has a boyfriend.

And now we’ve run into the proverbial elephant in She-Hulk’s courtroom: The visual effects. Fans have scrutinized the quality of She-Hulk’s design and the quality of the character’s VFX since the first trailer, and in the months since, several horror stories about the terrible working conditions that major studios—particularly Marvel—make visual effects artists work under have emerged. Time has improved since that initial trailer, but the design of She-Hulk verges a bit into the uncanny valley with it mostly making minor tweaks to Maslany (she’s taller, a little more muscular, has longer and smoother hair, and she’s green) versus the well-tuned (and very different) look of the Hulk.

Fortunately for She-Hulk, it has a not-so-secret weapon in Maslany, who spent five years creating magic under a plethora of wigs and accents in Orphan Black, so Jen’s humanity pops out even when Jen’s in full-Hulk mode, which makes some of the effects go down a bit better. And by that, I mean becoming green, because as we soon find out, there are no major differences personality-wise between Jen and She-Hulk, whereas Bruce spent years trying to keep his humanity whenever he turned into the Hulk.

Bruce does what he can to ease Jen into her new life by taking her to his hideaway/underground lab in Mexico that Tony Stark lent him, but Jen quickly shows it will be a very different orientation than what Bruce had. (Step 1: Remember the importance of spandex.) Jen’s blood is different enough to completely heal Bruce’s damaged hand from Avengers: Endgame. She finds certain concepts much easier to grasp and takes plenty of time to push Bruce’s buttons by asking if he’s quoting a comic book or pointing out harsh truths; the humor and quips are doing a lot of the work, and while it works, for now, time will tell if it becomes grating. She’s even much better about controlling her emotions, because, as she argued, it’s basically what being a woman in the world has her doing daily.

“When I’m catcalled in the street, when incompetent men explain my own area of expertise to me,” Jen explained. “I do it pretty much every day because if I don’t, I will get called emotional, or difficult, or might just literally get murdered. So I’m an expert at controlling my anger because I do it infinitely more than you. So all of this just feels like projecting a lot of shit onto me.”

What Jen isn’t as interested in is the superhero aspect of being a Hulk. She’d rather go home and use her law degree (one she’s still paying off for) to aid people than go the superhero route, while Bruce points out that she doesn’t exactly have a choice in the matter. He tries to get her to see things differently, leading to a Hulk and She-Hulk fight that works better as an emotional front than a visual one, but he eventually lets her go. But Bruce is right: Just as Jen starts her closing argument, Titania (Jameela Jamil), She-Hulk’s influencer villain, crashes into the courtroom, leading Jen to bring out She-Hulk and make quick work of Titania before attempting to get back to work.

What message is someone trying to get to Bruce? Why did Titania burst through into Jen’s courtroom? And how does the world react to She-Hulk? She-Hulk saves those for future weeks, but the mid-credits stinger does take on a very different theory: The status of Steve Rogers’ virginity.

Fans have long debated it, and the Captain: The First Avenger screenwriters said last year that Steve Rogers has definitely had sex. Early in the episode, Jen is on Team Virgin as she explained to a bemused Bruce that Steve would’ve never had the time to have sex between the war and all of his Avengers shenanigans. But later on, as they’re both drinking themselves silly—Hulks have a very high alcohol tolerance—and Jen drunkenly cries about how Steve Rogers and “that ass did not deserve to die a virgin,” Bruce throws her a bone: Steve wasn’t a virgin because “he lost his virginity to a girl in 1943 on the U.S.O. Tour.”

Chris Evans took all of this in with amusement.

Jen, who demonstrated that her crying was all an act, is satisfied with the answer. But might there still be Steve Rogers virgin truthers out there? You never know.