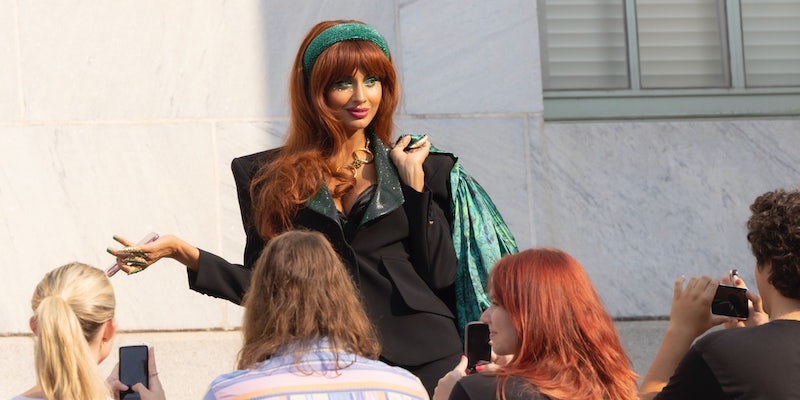 For several episodes, She-Hulk’s biggest villain to date, Titania (Jameela Jamil), has mostly been relegated to the sidelines. After literally bursting onto the scene at the end of episode 1, the villain/social media influencer, we only got the occasional mention until Titania got out of jail, registered “She-Hulk” as a trademark, and sued Jennifer Walters (Tatiana Maslany) over it. But Titania’s big debut just might be overshadowed by the tiniest of teases of what’s to come.

In Jamil’s hands, Titania is a vapid and business-savvy valley girl who has a lot of thoughts (none of them very kind) on Jen’s wardrobe choices. She’s the kind of character who’d unironically call her various businesses “side-hustles” and the kind of person who others might refer to as a scam artist. As an annoyed Jen notes to Nikki (Ginger Gonzaga) when scouting out Titania’s She-Hulk pop-up over at the Grove, she’s literally selling snake oil to people. (Naturally, all of her products are highly overpriced.) And like someone who can’t help but continue internet-stalking an ex-partner after the breakup, Jen can’t help but obsess over Titania and the use of the name she didn’t want but only just started to embrace.

Her lawsuit is a distraction (and not one that looks good for GLK&H), so her boss appoints fellow lawyer Mallory Book (Renée Elise Goldsberry) to represent her. Mallory seems like she only tolerates Jen, but she’s pleased enough that Jen didn’t try to pull a superhero-esque move and be dumb enough to represent herself.

Mallory suggests counter-suing Titania, but not before chiding Jen for not having the wherewithal to trademark She-Hulk for herself. And it’s not even the first time Jen is shamed for not having thought of that move sooner; her cousin Ched (Nicholas Cirillo) does the same thing while mansplaining trademark law to her.

In what turns out to be some rehashing of previous episodes, Mallory and Jen eventually settle on personal connections to argue that Jen’s use of the name predates Titania’s trademark being filed. It calls to mind not just Jen’s foray into dating as She-Hulk but also how Pug (Josh Segarra) humiliated his client to obtain a cease and desist order from a New Asgardian elf. Only this time, Jen is the one getting in the humiliation hot seat, meaning we not only get to see the cringey material she put in her dating profile but we also get to see every one of her failed dates explain why she wasn’t their type or what she did wrong on their dates. Meanwhile, She-Hulk continues attempting to convince us that Tatiana Maslany (even in Jen Walters form) is not a catch, a notion that might be even more unbelievable than some of the visual effects.

“Yeah, you can always count on me to throw myself under the bus,” Jen joked as she and Mallory celebrate their victory.

Nikki and Pug take on the now-standard plotline of getting She-Hulk a new outfit by nabbing her a consultation from exclusive super-powered fashion designer Luke Jacobson (Griffin Matthews). (And they only had to purchase some knockoff “Avongers” and “Avingers” merch—illustrated with the same emoji that appear on Twitter hashtags—and promise Luke would be dressing an Avenger to get the appointment.) Jen only wants a suit, and Luke isn’t interested until he’s given the challenge of creating outfits that fit both Jen and She-Hulk.

But we’ll have to wait to see just what Luke cooked up for her because the show is far more interested in showing us a different item: The yellow helmet we know that Daredevil (Charlie Cox) will eventually don. But whether he’s arriving on the scene next week or even later, we know he’s coming; the package, which Luke puts a lid on, clearly has “pick up” written on it.