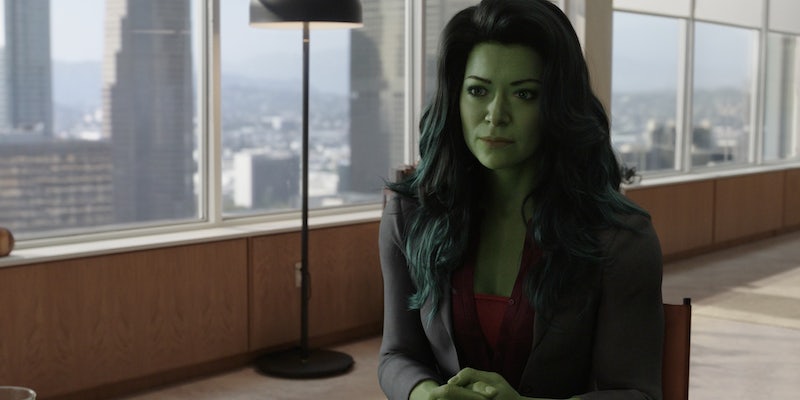 ‘She-Hulk’ episode 2 puts Jen Walters on a new career path as she encounters an O.G. villain from the MCU

With an appearance from one of the first MCU movie villains.

She-Hulk: Attorney at Law, like many of Marvel’s shows, is attempting to explore the real-world implications of getting superpowers. In a more transitional (and much shorter than usual) episode 2, it shows that while some situations are brand new, others remain the same.

Even after she gets control of her powers and gets a taste of saving the day at the end of episode 1, Jen Walters (Tatiana Maslany) has no interest in being a superhero. She racked up six figures in student debt after going to law school, and she wants to use her degree. She scoffs at the name given to her by the media—“That name better not stick,” she complains to her friend and paralegal Nikki Ramos (Ginger Gonzaga). (Narrator voice: It sticks.)

When Holden Holliway (Steve Coulter), an attorney at the law firm GLK&H, rolls up with a job offer, Jen’s only stipulation is that she can bring Nikki with her instead of any questions about benefits or pay. The job, Jen quickly learns, comes with its own stipulation, and it’s a non-starter: While most law firms think She-Hulk will be a distraction, GLK&H wants She-Hulk, going as far as to require Jen to appear in that form at all times. She’s to head a superpowered division, and her first client is a big one: Emil Blonsky (Tim Roth), or Abomination, who is up for parole.

Jen is riding high for a minute or two, and her family, already used to Bruce Banner (Mark Ruffalo), is more or less accepting of her Hulk status. But her family, which includes Mark-Linn Baker as her dad, Morris, finds other ways to get on her nerves as any good family does: They bug her to help around the house by doing menial tasks in She-Hulk form, and they fuss over her appearance (one member offers suggestions on how Jen can obtain She-Hulk hair in human form). Someone even gives out Jen’s number so that a young man (too young for Jen, apparently) can ask her advice about being a hero.

In the real world, it doesn’t exactly pay. For her moment of heroics, Jen is fired after the defense on her last case got a mistrial because Jen saved the jury from being killed. And if she thought her actions would help her in her job hunt, think again. None of the city’s law firms want to hire her because they think she’ll be a distraction.

It brings up a conundrum that She-Hulk mostly explores on a surface level (and mainly for jokes), just like another Marvel show. What benefits do superheroes actually get? Falcon and the Winter Soldier suggests that being Avenger doesn’t pay after a bank employee denied literal Avenger Sam Wilson (Anthony Mackie) a loan, making Jen’s worries about the Avengers not having healthcare, maternity leave, or pensions all the more real; Jen Walters is a working woman so these are real concerns for her. (And could it serve as a potential discrimination case down the line if another superpowered person is denied the ability to work as something other than a hero?)

Jen, with little choice in the matter even with her familial ties with Bruce (who Blonsky tried to kill in The Incredible Hulk) causing a conflict of interest, goes to meet with Blonsky. And he sells her a picture of remorse: He’s got several soulmates he’s been writing to, and he argues that the government ordered him to take out Bruce; he blames the damage to Harlem on the super-soldier serum he received that gave him his powers. Blonsky also wrote haikus to everyone he tried to kill to show his remorse. And even Bruce, who received both an apology and a haiku and gets to make a meta-joke about how he’s literally “a completely different person now,” seems to think Blonsky has changed and gives Jen the OK to take on the parole case.

But, for any superhero, there are some complications. Unbeknownst to Jen, Bruce is hurtling further into space on the courier ship that accosted their car last episode, which could be the start of putting its spin on a more recent crossover. Her problems with Blonsky are much more pressing: Despite telling Jen he no longer chooses to turn into Abomination, footage of Blonsky fighting Wong (Benedict Wong) in a cage match (which happened in Shang-Chi) just went viral, making it that much harder to argue that he’s changed.