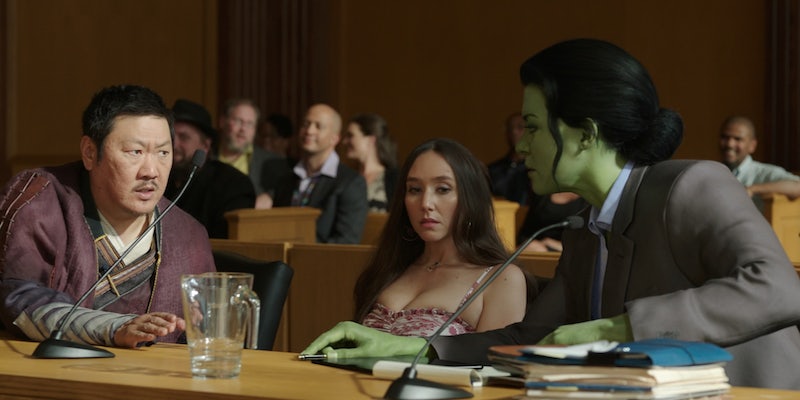 In episode 4, She-Hulk settles into a more comfortable format, balancing Jen Walters’s (Tatiana Maslany) attempt to balance her work and home life. But for Jen, it’s harder than it looks, especially as both of her lives bleed together and have her fighting literal and inner demons.

The case of the week leans in on an MCU as Wong (Benedict Wong) sues Donny Blaze (Rhys Coiro), a former student of the Mystic Arts turned stage magician, who’s using what little knowledge he gained before being kicked out to send volunteers through portals. He would’ve gotten away with it, but one of his volunteers, a party girl named Madisynn (Patty Guggenheim)—“with two N’s, one Y, but it’s not where you think,” she repeatedly explains to anyone who asks for her name, drawing out the last word—inexplicably lands in Wong’s living room as he jams out to The Sopranos theme song.

“I guess you saw that Wong is back,” Jen says to the camera. “God, everybody loves Wong. It’s like giving the show Twitter armor for a week.”

Wong’s reappearance might not garner as much Twitter armor as she thinks it will. She-Hulk’s brief inclusion of Jen twerking with Megan Thee Stallion in last week’s stinger sustained mad fans for days, but for some, She-Hulk may have committed the ultimate faux-pas as Madisynn’s appearance kicks the show into full gear: Spoiling another TV show.

You see, Wong is watching The Sopranos for the first time while Madisynn’s already watched it. He’s on a very pivotal episode in season 5, and because Madisynn’s watched through, she informs her new BFF “Wongers” just what happens in that episode because it made her cry for several days. (You can certainly argue that the statute of limitations on some of those plot points in The Sopranos, which aired nearly 20 years ago, has long since lifted.) And she does it again later on by casually dropping another big reveal. By the time She-Hulk reached the stinger, he’s switched over to This Is Us, which Madisynn seems to know a lot less about.

Wong is mad enough about the Sopranos spoiler that he’s willing to take it out on Donny Blaze and make an example of him. Fortunately, he knows just the superpowered lawyer who can handle giving Blaze a cease and desist. But it takes time for the judge to issue her ruling, and until she does, Blaze can still put on his magic show.

For Jen, another major issue looms large: her dating life. She’s frustrated with the options out there—“There are plenty of non-gross people out there for you to date,” Nikki (Ginger Gonzaga), who also bemoans how grim hetero life is to Jen, tells her—and her initial findings on Matcher, She-Hulk’s version of a dating app, are duds. As Jen, she gets a notification when she doesn’t match, and the only person who meets up with her is someone who prefers New York (where he lived for 14 months) to Los Angeles, leaves Jen with the drinks bill, and complains about her looks the moment he leaves. She-Hulk treats this part of Jen’s life with as much gravitas as the superhero stuff, filming the grabbing of the wallet in slow-motion as if they were drawing guns.

In comparison, She-Hulk is a catch on Matcher, but that doesn’t guarantee that her dates are any better. Instead, her matches are asking her about her body’s limitations, treating her like a science experiment, and talking about themselves way too much. (OK, that one happens with non-superhuman dates, too.) It’s dire enough that Arthur (Michael Curiel), who cedes the floor to Jen, knows how to remove wine stains from Jen’s couch, and reads Roxane Gay’s Bad Feminist while Jen is stuck sending dozens of demons through one of Wong’s portals while he has to fix the one Blaze broke. But even he has his limits: While he’s totally into She-Hulk, he can’t get away fast enough the next morning when he walks into the kitchen to find regular-sized Jen Walters offering him breakfast.

Ultimately, Donny Blaze accepts the cease and desist order as a way to give his thanks. But it’s not the last cease and desist we’ll see: Now out of jail, social media influencer villain Titania (Jameela Jamil) is suing Jen over the misuse of the name She-Hulk, which Titania managed to trademark. Jen and Nikki might not even like the name She-Hulk, but that might change now that someone else is trying to encroach on it.