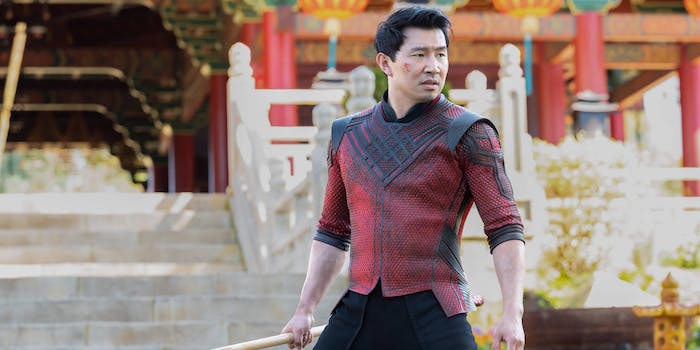 Shang-Chi and the Legend of the Ten Rings/Disney

The uncertainty of its theatrical release is the most likely explanation for 'Shang-Chi's' comparatively low-key marketing push.

As the release date for Marvel‘s Shang-Chi and the Legend of the Ten Rings approaches, some Marvel fans are beginning to wonder about the lack of hype. “Is it just me or does it seem like the marketing for this movie is just not happening?” asked one TikToker, pointing out that while actor Simu Liu is very active on social media, the overall buzz for the film seems pretty quiet.

Shang-Chi will hold its premiere on Monday Aug. 16, with a theatrical release on Sept. 3. That’s three weeks from now, and while the cast and director have done sporadic interviews over the past year (and appeared on August’s cover of Empire magazine), they’re less visible than the aggressive promotional push for Marvel’s Disney+ shows. Director Destin Daniel Cretton has only done one major interview in the past month (Empire), whereas the director and lead writer of Loki are a ubiquitous presence in relevant media outlets. Shang-Chi‘s big-name stars, Awkwafina, Michelle Yeoh, and Tony Leung Chiu-wai, have also been relatively low-profile compared to the Disney+ actors.

This slow rollout is leading some Marvel TikTokers to accuse Disney of failing to promote the movie due to racism. “The fact that Shang Chi is like the least hyped marvel movie I’ve ever seen feels racially motivated…” said one TikToker, in a video with over 150,000 likes. As the first MCU film with an Asian star, why isn’t Shang-Chi as visible as its predecessors?

One likely explanation is that Disney was waiting to finalize the film’s release date—a date that could easily have been delayed at the last minute due to COVID-19. Studios typically spend tens or hundreds of millions of dollars on marketing a film of this size, with most of that money being spent in the weeks leading up to the release date. But thanks to the pandemic, a lot of blockbuster releases—for instance Black Widow and the next James Bond movie No Time To Die—had their release dates pushed back. This meant repeated interruptions to their promotional calendar, and Disney almost certainly went over-budget thanks to Black Widow‘s delays. The studio may want to avoid this happening with Shang-Chi.

Disney confirmed this week that Shang-Chi will have an exclusively theatrical release, only appearing on Disney+ after 45 days in cinemas. There’s still a lot of uncertainty about whether it’s safe to visit movie theaters, and thanks to recent surges of the delta variant, other films like Venom: Let There Be Carnage have been been pushed back once again. Disney was weighing its options for Shang-Chi, facing three potential choices: delay the film again, deliver a hybrid release on Disney+, or release it the old-fashioned way in theaters.

This uncertainty is the most likely explanation for Shang-Chi‘s comparatively low-key marketing push, but we’ll learn more in the weeks leading up to Sept 3. If the typical MCU marketing machine kicks into gear, three weeks is enough time to get everyone talking about Shang-Chi. Right now it’s definitely a bad look for Shang-Chi to have a lower profile than Marvel’s majority-white franchises, but since Disney’s entire goal here is to make money, it wouldn’t make sense to release the film in theaters and not promote it properly.

The Daily Dot has reached out to Disney.