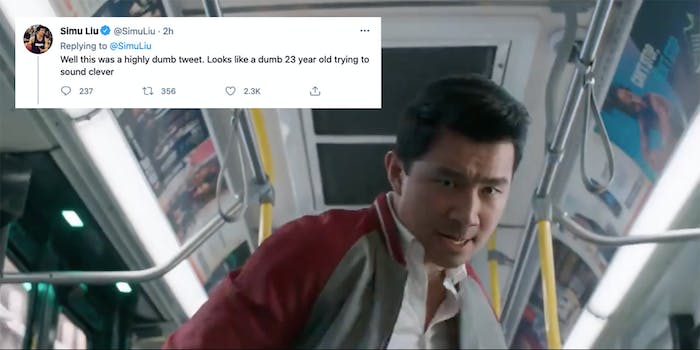 ‘This the fastest I’ve seen someone get cancelled’: Questionable tweets from ‘Shang Chi’ star resurface hours after Marvel trailer

Liu wondered, 'Is it legal for Ariana Grande to be dating Big Sean?'

Monday was supposed to be a celebratory day for actor Simu Liu, the star of the upcoming Shang Chi, which had a monumental trailer drop earlier in the day. But by the afternoon, he ended up doing some damage control on some nearly-a-decade-old tweets that came back to haunt him.

Marvel Studios presented the trailer, in a Monday morning tweet, as a birthday present for the now 32-year-old Canadian actor, writer, and stuntman.

Liu was especially excited, with an observer capturing his all-caps keyboard explosion.

Lui even commented on trending, noting, “Picking up poop when I realize we’re trending #1 in America.”

However, someone responded to his comment about trending by noting, “Because of your anti-blackness maybe,” which might seem confusing at first glance, given that Liu touts his immigrant status and spoke out against anti-Asian racism last month in a guest essay for Variety.

However, people went digging into the Simu Liu tweet archive, and found questionable and arguably racist tweets posted on the account between 2012 and 2014.

One took the very bad online tactic of making fun of Nicki Minaj, who is adept at clapping back on social media. The tweet was deleted today prior to press time and read: “I thought I was at a nicki minaj concert for 20 minutes before I realized I was just watching a homeless man yell at a pigeon….”

One other questionable tweet surfaced involving celebrities. From 2014, it observed about Ariana Grande and Big Sean’s relationship, “Is it legal for Ariana Grande to be dating Big Sean? Just wondering.” It was not deleted as of press time.

Another now-deleted tweet was directed to an @ashnolaa that’s no longer an active Twitter account—though there are other tweets directed toward that person around the time frame that seem to concern Toronto and fashion. It reads, unfortunately, “Hey, look at me, I’m @ashnolaa and I’m 5 foot 9.” It then continues, “Oh wait, my heels are r******d; I’m actually just 5 foot 4,” before adding a final “DHUR” for emphasis.

Liu acknowledged the problematic nature of the tweets doing clean-up, noting, “Well this was a highly dumb tweet” on the tweet about Minaj, adding, “Looks like a dumb 23 year old trying to sound clever.”

While there was debate on Twitter as to whether the tweet about Minaj was racist or just expressed musical taste, however inelegantly, a few people expressed concerns about how Twitter policing was being applied.

Twitter user @nvcstny pointed out, “The way people dug up old tweets about Simu Liu the second the Shang Chi trailer dropped (which should be addressed, don’t get me wrong), but refuse to hold your white faves accountable does not sit right with me at all.”

Another decried the anti-Asian sentiment that piling on Liu seemed to encourage, noting, “I am not defending Simu Liu in any way, but those tweets does not give you any reasons to tell Asians to eat dogs, or tell us that we can barely see things because of our eyes.”

Another person warned, “We are not joking btw; do not open the qrts to Simu Liu’s tweets,” going on to observe that it included dead animal pictures as well as a number of anti-Asian comments.

Bork Runner noted, “Going through Simu Liu’s old tweets looking to cancel him is absolute bottom-feeder activity and y’all need to get a life.”

Mr. Undead added, “People are genuinely trying to say that Simu Liu is racist because he made fun of Nicki Minaj. I swear y’all just cancel people out of boredom these days.” He then added, “Shut the f*ck up and let him enjoy his birthday.”

Liu had some fans in his corner, though, with one fan responding to his “highly dumb tweet” tweet by saying, “You don’t have to apologize king. Sure it was a dumb joke but you had a point. Ignore the senseless hate.”

This all led one Twitter user, quote-tweeting one of the now-deleted tweets, to marvel, “This is the fastest I’ve seen someone get cancelled.”

Though, as matters develop, it may be more of a blip for Liu than a full-on cancellation.