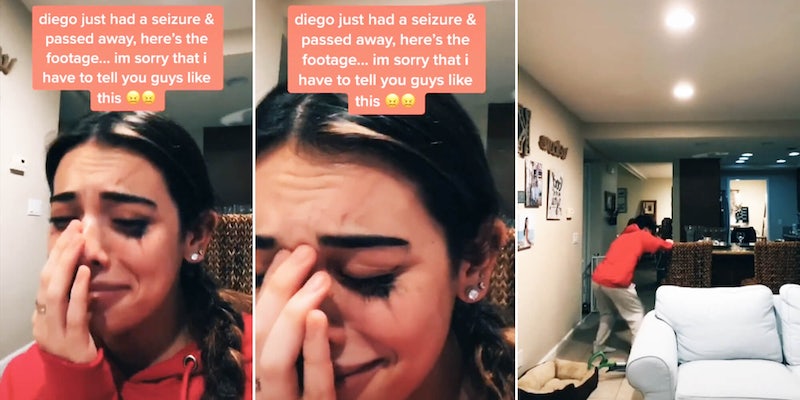 The teens are at it again.

Ladies and gentlemen, nonbinary and genderqueer folks, we regret to inform you that the youths are up to it again. And by “it,” we mean faking seizures, as well as their own deaths, on TikTok. It’s known as the “seizure challenge,” and it’s re-emerging as part of the app’s “something traumatic” trend.

It all started last year when TikTok users began performing the so-called seizure challenge to rapper Juice WRLD’s song “Lucid Dreams,” which involved pretending to have a seizure and spitting out water. Juice WRLD himself later eerily died of a seizure at a Chicago airport, leading to people freaking out about “predicting” his death.

Coincidence or not, one might think that, at the very least, kids might realize that seizures are no laughing matter. Yet here we are.

Two high-profile teenage TikTok users, 16-year-old Diego Martir and 17-year-old Haley Orona, who have over 10 million followers between the two of them, have both come under fire for participating in the seizure challenge. Orona has since deleted her video, but Martir’s is still active at the time of this writing.

In Martir’s clip, his girlfriend Lauren is seen crying with her mascara smudged, as the audio clip “ayo, something traumatic happened that changed my life check” begins to play. A text block over the video says: “Diego just had a seizure and passed away, here’s the footage I’m sorry that I have to tell you guys like this.”

The camera then switches to Martir, who poorly acts out a seizure before suddenly twerking and slapping his butt.

The clip has gathered over a half-million likes, but not everyone was quite so amused by his seizure challenge. Although Martir himself commented, “it’s a trend, pls don’t come for us,” some evoked Disney Channel star Cameron Boyce, who died at the age of 20 last year after suffering a seizure in his sleep, which had been the result of an ongoing medical condition.

Other TikTok clips use the same audio—user @courtneyleehewitt’s “Something Traumatic”—in similar videos where they fake seizures or pretend to have other accidents.

In extremely poor taste or not, it seems as if the seizure challenge is here to stay—at least until the next trend takes over.