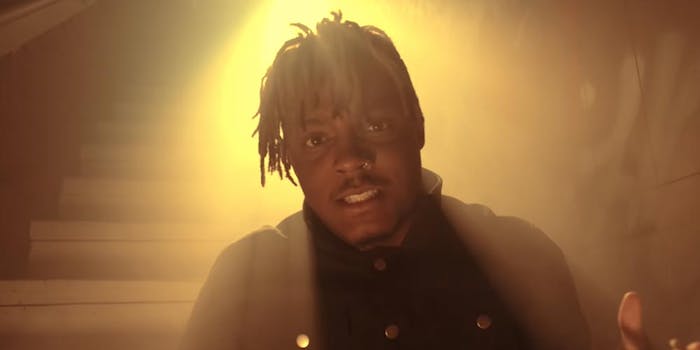 Fans and celebrities are mourning the loss on social media.

The 21-year-old artist, best known for his hit song “Lucid Dreams,” was witnessed collapsing at the airport and later seen bleeding from his mouth, TMZ reports.

Although the rapper was reportedly conscious while being transported to a nearby hospital, Higgins was pronounced dead shortly after his arrival.

Chicago police spokesman Anthony Guglielmi told Heavy that the medical examiner is still attempting to determine the cause and manner of death but that “there are no initial signs of foul play.”

Fellow artists expressed their disbelief and mourned the loss on social media Sunday.

“Wow, I can not believe this,” Lil Yachty tweeted. “Rip my brother juice world.”

“I loved his music and he was my most listened to artist in 2019,” Ninja said. “Im heartbroken, my love goes out to his family and loved ones. To soon man.”

Waking up to @JuiceWorlddd passing from a seizure… I loved his music and he was my most listened to artist in 2019. Im heartbroken, my love goes out to his family and loved ones. To soon man.

British pop star Ellie Goulding, who worked with the rapper on the track “Hate Me” earlier this year, recounted her time with Juice WRLD on Twitter.

“I’ll always remember meeting you and your family on the video set and thinking how close you were,” Goulding said. “You had so much further to go, you were just getting started. You’ll be missed Juice.”

I can’t believe it… you were such a sweet soul. I’ll always remember meeting you and your family on the video set and thinking how close you were. You had so much further to go, you were just getting started. You’ll be missed Juice 💔

Lil Nas X used the tragedy to tell his fans to “live in the moment” and expressed concern over the number of young stars who have passed away.

rip juice. so sad how often this is happening lately to young talented rising artists. 🖤

i usually deal with my sad times in private because i don’t like for my fans or family to feel sorry for me. this year had a lot of very high ups and extremely low downs. when u get to that hotel room and it’s just you, you do a lot of thinking. small things become so BIG.

i like to pretend hate and shit don’t get to me, but subconsciously it eats away at me. feeling like u have the world and knowing it can all go away at any time is scary. with all this being said i want anybody who cared enough to read this to just live in the moment. love u guys

It’s been noted that the artist frequently remarked on his own mortality in numerous songs, such as “Legends,” in which he raps that “We ain’t making it past 21.”

Higgins was also open about his struggles with substance abuse, frequently referencing the painkiller Percocet, as well as the Codeine-containing cough syrup mixture known as “lean.” The rapper stated in July, however, that he had finally quit using lean and was working to become healthier.

With the results of the artist’s medical examination still pending, it remains unclear as to whether drugs played any role in the untimely death.

Juice WRLD is the latest to pass away following the death of numerous young rappers, including XXXTentacion, Mac Miller, and Lil Peep.