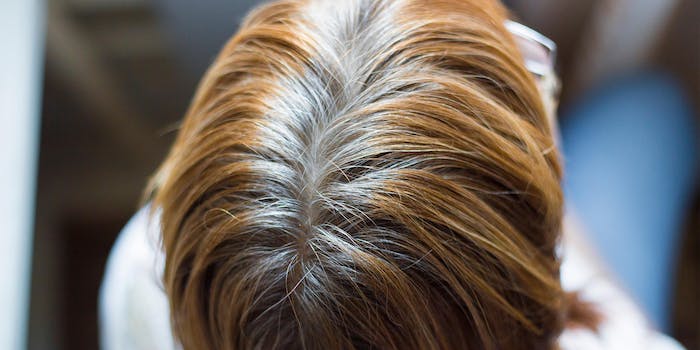 Rebecca had a hard time believing somebody’s roots could go so haywire in just a few weeks.

Protesters showed up en masse at the state capitol in Lansing, Michigan, where Gov. Gretchen Whitmer reportedly ordered to shut down the parts of big-box stores that sell “nonessential” items and limited interstate travel. The demonstration, known as #OperationGridlock, included thousands of Karens, many of whom demanded that local hair and nail salons reopen so they could exercise their basic human rights to be pampered by underpaid beauticians.

TikTok user @rebabeba (or Rebecca) was captivated by one such Karen who revealed her extensive undyed roots to a cameraperson and insisted that Whitmer’s stay-at-home orders kept her from fixing her hair. Rebecca had a hard time believing somebody’s roots could go so haywire in just a few weeks, so she did some calculations to get to the bottom of it.

Michigan’s stay-at-home order began on March 24, or 28 days before Rebecca uploaded her video to Tiktok (April 21). She calculated the average monthly hair growth (half an inch) and the average length of a woman’s pointer finger (108 mm) for scale. Using these figures, Rebecca measured the approximate length of the woman’s roots and estimated that she hadn’t gotten her hair dyed since October.

Rebecca’s investigative reporting quickly went viral; her Tiktok video has nearly 323,000 views and 80,000 likes. “Sis did her research,” reads the top comment, which has nearly 8,600 likes itself. Another commenter highlighted the obvious frivolity of these protests, writing, “I love how her main concern is her roots while we’re out here at over 32,000 cases and growing with almost 1,000 new cases everyday.”

The TikTok sensation quickly migrated to Twitter, where Mark Hamill shared it. “This is what happens when people have too much free time on their hands,” the Star Wars alum wrote in a tweet that has surpassed 28,000 likes.

In Rebecca’s defense, if Karens would stop hitting the streets to demand that a bad haircut and dye job are essential rights, then she wouldn’t have to make viral videos calling them on their foolishness.