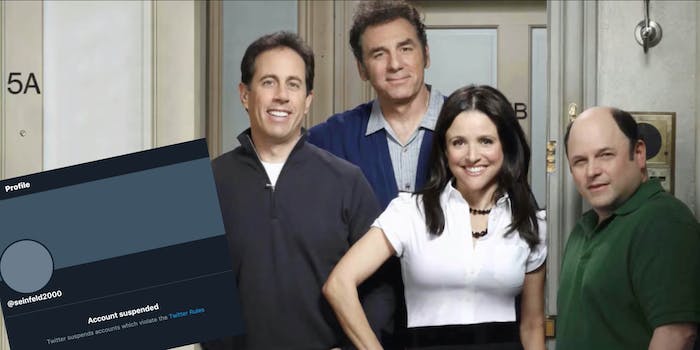 The account imagines if 'Seinfeld' was still running today.

The account has been around since 2013, and in that time has racked up an impressive 240,000 followers. Run by Jason Richards, the account satirizes fellow parody account Modern Seinfeld. For an unknown reason, the mega-popular account was suspended last week. Fans of the account’s humorous posts are wondering why, and if the suspension will be lifted any time soon.

In Seinfeld‘s impressive nine-year run, it tackled all the major issues of the day with a clever joke and a wink to audiences. Many of the storylines and jokes from the series are quite outdated in 2019, however, which is where Modern Seinfeld comes in. The Twitter account, created in late 2012, imagines plot lines for the iconic series if it were still running today.

George's GF wants a "no phones at dinner" rule. G: "We had a good thing going, Jerry! Now we're supposed to talk? That can only end badly!"

The account, which was created by writer Jack Moore and comedian Josh Gondelman, has nearly 800,000 followers. Its passionate homage to the beloved series inspired Seinfeld2000 to create a satirical account. The account describes, in its Twitter bio, its overall objective: “Imagen Seinfeld was never canceled and still NBC comedy program today,” the bio reads. The account, much like Modern Seinfeld, reimagines the characters from the sitcom in a modern setting. Internet trolls, cell-phone use and heaps of other modern scenarios dominate the popular page.

It’s happening, folks… The Fall Of Seinfeld from timecrisis

Unfortunately, fans of Seinfeld2000 recently visited the page only to find it suspended. Considering the account’s rather tame objective, many fans were surprised. One user took to Reddit to ask the community if they were aware of why the account had been suspended. Theories quickly began circulating. “He probably didn’t do anything,” user iwatch-thebees wrote. “It’s been happening that random popular accounts are suspended for a few days then reinstated, so he’ll probably be back by next week if not sooner.”

Twitter did not immediately return the Daily Dot’s request for comment. Considering the account’s reliance on mimicry, it is also possible that Richards accidentally violated copyright law, which could easily lead to a brief suspension.

“Popcorn and raisins man… truly disgusting stuff. Violated twitters human decency rules,” another user sarcastically stated. Other fans criticized Twitter for suspending a parody page when hate speech and racism often run rampant on the platform. “There still nazis on twitter but no let’s suspend the most popular Seinfeld fan account on the internet,” sighborg21 wrote.