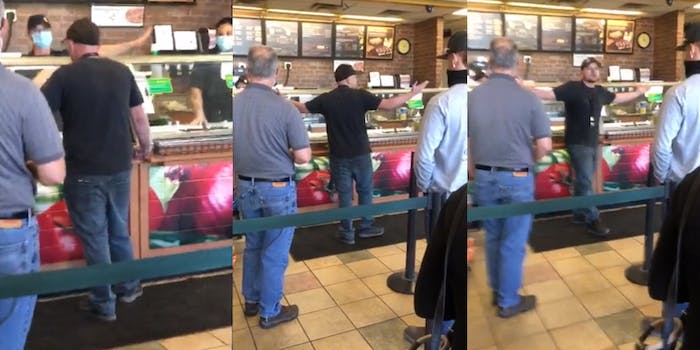 ‘Sandwich Karen’ won’t wear a mask, freaks out at Subway

Sir, this is a Subway.

The woman is clearly not going to make his sandwich, and he starts to go ballistic. “I have freedom; I have rights! Serve the people,” he says.

She tells the “Karen” that she won’t serve him under no uncertain terms. He threatens to call an authority, but she’s unfazed.

“You’re breaking the law; you’re following them. I have free,” he yells.

Then he tantrums-out, demanding his sandwich. “I want my sammage.”

She asks him, again, to wear a mask, and he disrespectfully declines: “I need to breathe!”

Then, he turns around at the law-abiding future eaters of sammages in line and excoriates them for wearing masks: “What’s your fucking problem, wearing your fucking mask?”

Realizing nothing would get him his sammage, he takes the free he has and storms out, throwing and smashing what would’ve been a tasty bag of chips on the way.

u/OkieTaco wrote in response to the video: “Imagine being that upset about not getting your shitty subway sandwich. I mean it ain’t no Jersey Mikes. It’s subway, like the worst version of a sandwich.”

A disgusted u/GarciaJones wrote: “Funniest shit tho, when he says ‘I NEED TO BREATHE’ and he turns around looking at like 5 people…..All breathing fine in a mask lmao like come on. You Whiny little cry baby. Ohhhh your freeeeeeeeedom huh?