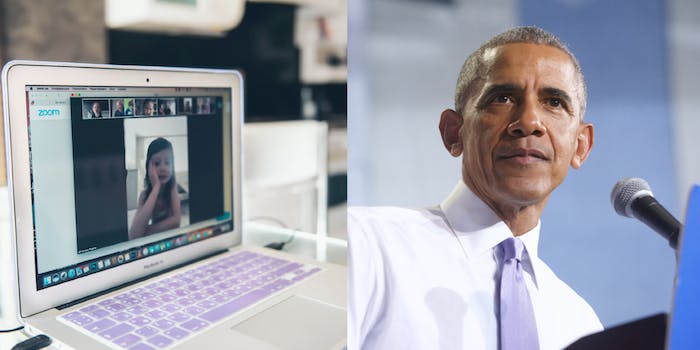 'We're not going to talk about it unless you want to hear what I have to say!'

A student’s grandmother crashed her online class this week to protest a discussion about the Black Lives Matter (BLM) movement.

In a video uploaded to TikTok, the woman, who has since been dubbed a “Karen,” can be heard arguing with her granddaughter’s teacher.

“You’re talking about BLM and all that stuff,” the woman says. “And we’re not going to talk about it unless you want to hear what I have to say.”

The grandmother goes on to make odd references to former President Barack Obama while shouting over the teacher.

“Barack Obama was biracial,” she says. “He wasn’t just Black. He should have owned both sides of his family.”

The teacher responds by attempting to note that a student, not her, brought up BLM.

“Ma’am, we’re reading a story about a historical event, and the question that was presented to the students is ‘What’s the most important historical event that’s happened in your lifetime?'” the teacher says.

But the student who allegedly brought up BLM claims that he never actually referenced the term at all, raising questions over what exactly set off the woman.

“I didn’t even say Black Lives Matter,” the student says. “I never even said that.”

The video exchange has already been seen more than 1.1 million times on TikTok alone.

TikTok users made their displeasure with the Karen known in the video’s comment section.

“The teacher should’ve muted her,” @daddysfavgirlalways wrote. “Not the place or time.”