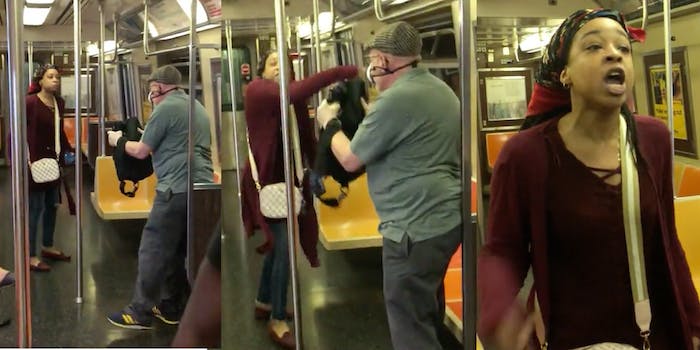 The Karen even claims that COVID-19 is 'fake' during her meltdown.

A woman in New York City was captured on film assaulting an elder who had asked her to wear a mask on the subway.

The incident, which was posted to the popular r/PublicFreakout subreddit, begins with the maskless woman shoving the senior citizen on the city’s Q train.

The woman, who has since been dubbed “Subway Karen,” then shifts her attention to the man filming.

When asked to put the mask on, the woman refuses and claims she will only do so after finishing her phone call.

“You need to put your mask on when you’re on public transportation,” the man filming says.

The woman, who responds by accusing the man of being racist, then goes on to call the coronavirus “fake” after another passenger notes COVID-19’s disproportionate effect on the Black community.

The situation only intensifies when the man filming threatens to call the police.

The woman continues her verbal tirade before the man filming eventually steps halfway off the train to keep it from moving.

“You’re not going to get away with hitting him,” the man says.

The woman goes onto argue that she was justified in assaulting the elder because he invaded her personal space.

Not long after, other passengers, attempting to get to work, come to the defense of the woman in an attempt to get the train moving.

Another woman even approaches and defends the Karen for not wearing a mask, saying that it’s fine because she “works in healthcare.”

Eventually, the man standing in the doorway concedes defeat and allows the train to leave.

The city announced earlier in September that it would be giving $50 fines to anyone refusing to wear a mask on publicly-run buses or trains.