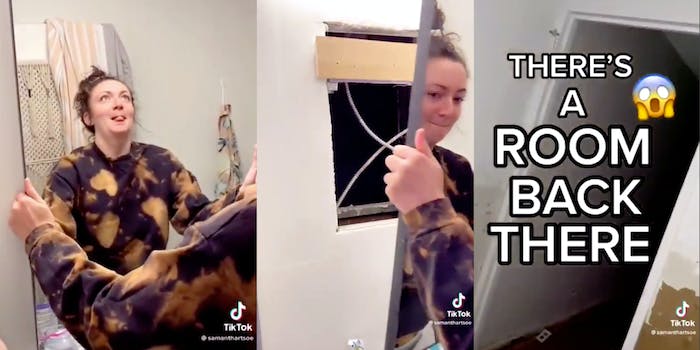 ‘This reminds me of the Ruthie Mae McCoy case’: Viral TikTok of secret room behind bathroom mirror draws comparisons to 1987 murder

Ruthie Mae McCoy was reportedly killed by someone who snuck through her medicine cabinet.

A TikTok video of a woman discovering a secret room behind her bathroom mirror went viral on Thursday, leading the 1987 murder of a Chicago woman to resurface.

New Yorker Samantha Hartsoe posted a four-part series on TikTok detailing her discovery, with many noting its similarities to Candyman. “Someone has clearly not watched CANDYMAN,” one said after watching Hartsoe climb through the gaping hole behind her mirror to explore the hidden room.

But the instance also parallels the circumstances surrounding the 1987 murder of Ruthie Mae McCoy, a 52-year-old woman who was reportedly fatally shot by at least one person who snuck into her unit through her medicine cabinet.

As we previously noted, several people online brought up McCoy’s death following Hartsoe’s video. One tweet, in particular, caught many people’s attention, with over 12,000 shares since being posted on March 4. “A woman named ruthie mae mccoy was murdered in chicago in the 80s by someone who came into her apartment through her bathroom mirror, the candyman movie is allegedly loosely based on it. lawsuit!!!” @afroelven wrote, linking to a Chicago Reader article about the murder.

The journalist who originally penned the article, Steve Bogira, implied that the murder inspired the original Candyman in 1992, though the speculation has never been confirmed.

While Hartsoe took a hammer “for protection” when exploring the mysterious room in her apartment, it ultimately wasn’t needed. However, she did note that she will be having a “really fun phone call” with her landlord, and that’s probably for the best.