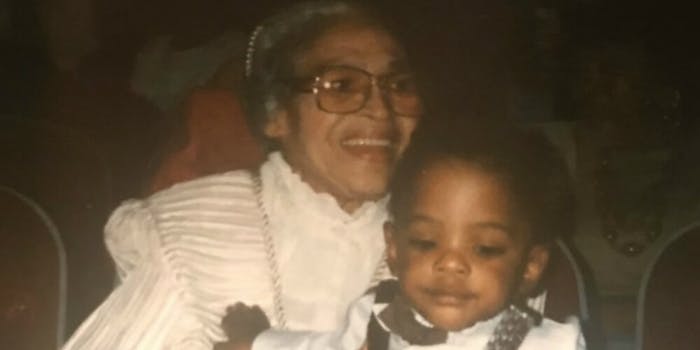 Is that Rosa Parks in random Twitter user’s baby photo?

Most people share baby pictures featuring cute teddy bears or cuddly blankets. But one Twitter user is breaking the internet with a less than ordinary photo of himself with none other than what appears to be Rosa Parks.

Twitter user @lovechvn was taking part in a meme, in which Twitter users share side-by-side photos of themselves when they were babies and their present-day selves.

“Lil Chan vs Big Chan,” Twitter user @lovechvn wrote. His baby photo features him being held by a woman, who, as a slew of Twitter users later pointed out, seems to be the Civil Rights icon.

To make matters more interesting, lovechvn never made any mention of Parks in the now-viral tweet.

“Wth.. am I trippin? or is that Rosa Parks?” Twitter user @Its_Somadina questioned.

wth.. am I trippin? or is that Rosa Parks?

Others reacted with Civil rights-themed memes.

“So you just gon casually post up in Mama Rosa Parks lap like we not gone acknowledge its her? Lmao,” another jokingly asked.

So you just gon casually post up in Mama Rosa Parks lap like we not gone acknowledge its her? Lmao pic.twitter.com/FY7Tb3JO4b

Many wanted to know just how lovechvn ended up in a photo with Parks and wondered if the two are related.

WHY WON'T YOU ANSWER?!? pic.twitter.com/3LThbT4jMn

Eventually, lovechvn chimed in to answer the question Twitter users were asking.