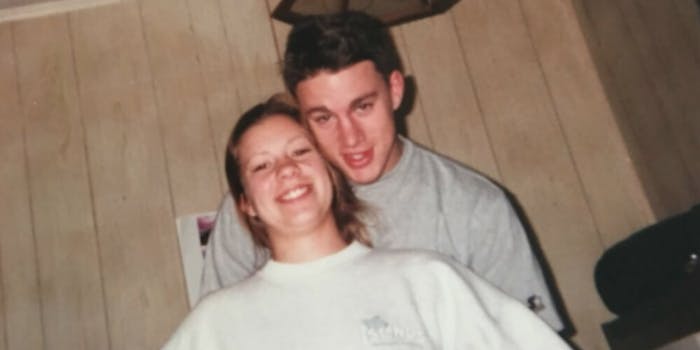 She has the pics to prove it.

Before Channing Tatum made his Hollywood debut with his role in Coach Carter, he was just a normal guy doing normal guy things.

One Twitter user, @faiitthh33, was surprised to find out that dating her boyfriend’s mom was among those normal things–and she has the pics to prove it.

“My boyfriend’s mom dated Channing Tatum in high school and she found photos of them last night,” @faiitthh33 tweeted.

I couldn’t live knowing I let that man go

Commenters flocked to the post to share in her delight and mourn the loss for her boyfriend’s mom since things obviously didn’t work out between the couple.

“I couldn’t live knowing I let that man go,” Ally Munoz commented. “Sounds like she fumbled the bag to me,” another said.

I couldn’t live knowing I let that man go

Others even proposed their own conspiracy theories about the couple’s past.

“She won at life but real question is did he take her virginity?” one user questioned. Another asked if @faiitthh33 was dating Tatum’s “secret son.”

She won at life…but real question is did he take her virginity? pic.twitter.com/Ix10v1W2GT

This is not the first time a revelatory post uncovered information about Tatum’s past. Back in 2016, another Twitter user posted old pictures of Tatum, alleging that he used to hang out with her stepmom.

“My step mom used to hang out with Channing Tatum, I’m shaking,” she wrote along with photos.

MY STEP MOM USED TO HANG OUT WITH CHANNING TATUM IM SHAKING pic.twitter.com/kqz4C9IPsr