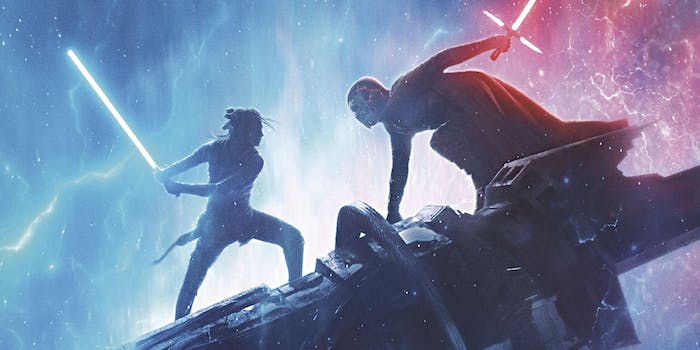 ‘The Rise of Skywalker’ novelization makes more sense than the film

It will actually help you appreciate the movie.

The Rise of Skywalker novelization arrives in a hail of splashy headlines about seemingly absurd new revelations for Star Wars canon. Palpatine is a clone! Rey and Kylo Ren’s kiss was (allegedly) platonic! This book has become the new source for J.K. Rowling-style memes about bizarre new additions to a beloved franchise. But as it turns out, that really isn’t a fair judgment. Written by YA author Rae Carson (who previously published other Star Wars tie-ins including a prequel to Solo), The Rise of Skywalker: Expanded Edition is… a totally normal movie novelization. It’s not a depository of wild new Star Wars canon zingers. It’s also a lot easier to follow than the original film, explaining some of the more confusing or poorly-conceived elements we saw onscreen.

For many Star Wars fans, The Rise of Skywalker was an underwhelming finale to the Skywalker Saga. Some of the film’s narrative choices either felt like abrupt reversals after The Last Jedi or simply didn’t make much sense. Palpatine’s unexplained resurrection. The fleet of planet-killing warships that just didn’t go anywhere. Finn repeatedly trying to confess something that was never actually revealed. Poe’s sudden personality shift. The fact that Jannah is probably Lando’s daughter, but this is never clarified onscreen. On top of that, the film’s locations were often oddly unclear, like the Resistance relocating to a jungle that resembled the Rebel stronghold on Yavin, but was actually a brand new planet. Some of these issues can be fixed in the novelization, where plotholes and backstory details are filled in by the characters’ internal monologues.

As a self-professed “expansion,” the novelization includes a fair amount of content we didn’t see in the movie, including more scenes with Leia, Lando, Zorii Bliss, and General Hux —whose petty hatred for Kylo Ren is perhaps the funniest part of the book. Leia feels especially important because her role in the film was so minimal. Since J.J. Abrams was working exclusively with leftover footage of Carrie Fisher, her screentime was limited to simple conversations where she spoke a couple of lines and other characters picked up the slack. At the best of times, it required extra legwork from the audience’s imagination. The book gives us more emotional insight from Leia’s perspective on those scenes, along with some unseen moments between her and the Resistance.

It’s interesting to see where the book smooths over certain problems in the movie, but highlights them elsewhere. Rey and Kylo Ren’s emotional arc is the driving force of the film, and it’s wholly reliant on Daisy Ridley and Adam Driver’s powerful performances. They sell a storyline that hinges on mysticism and undefined emotion, taking them from mortal enemies to romantic allies by the end. We don’t actually need any further explanation from the novel—and for what it’s worth, I don’t think the book debunks their love story at all. It’s pretty clear that they’re attracted to each other as partners (a “dyad”) within the Force, even if this kid-friendly Disney novel doesn’t explicitly confirm a sexual element. But either way, it works better on-screen than it does on the page.

The same goes for a lot of the scenes with Finn or Poe. Their roles were either too simple (Finn) or out-of-character (Poe) in the original script, relying on the actors to inject charisma into shallow banter and one-liners. Their dialogue just doesn’t work as well on the page, and while Rae Carson fleshes out the lives and inner thoughts of several secondary characters like Zorii Bliss, she can’t just dream up a new explanation for J.J. Abrams rewriting Poe’s role in contradiction to the last two movies.

With a simple prose style, the Rise of Skywalker novelization skews a little younger than recent adult Star Wars novels. Of course, it also serves a different purpose than original novels taking place between the movies. There are obviously no surprises in a retelling of a story we already know. Aimed at die-hard fans, it has a similar appeal to tie-in books like the Star Wars visual dictionaries, which offer detailed backstories and photos for the most minor of props and characters. The Expanded Edition gives more screentime to the supporting cast, and adds satisfyingly nerdy details about spaceships, alien planets, and obscure character backstories. Some of them are more surprising than others (for instance, the whole Palpatine clone thing), but ultimately this is an easy read that will improve your experience if you plan to rewatch The Rise of Skywalker.